Sara Lee, a former WWE “Tough Enough” winner who performed on the company’s NXT brand for nearly a year, has died, her mother announced on social media. Lee was 30.

“It is with heavy hearts we wanted to share that our Sara Weston has gone to be with Jesus,” Terri wrote. “We are all in shock and arrangements are not complete. We ask that you respectfully let our family mourn. We all need prayers especially Cory and her children.” 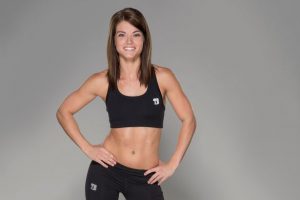 “WWE is saddened to learn of the passing of Sara Lee. As a former ‘Tough Enough’ winner, Lee served as an inspiration to many in the sports-entertainment world. WWE offers its heartfelt condolences to her family, friends and fans,” the company said.

Lee participated in the sixth season of WWE “Tough Enough” in 2015, which is a reality series run by the pro wrestling company to determine who would get a WWE contract. She won the event with Josh Bredl, who wrestled as Bronson Matthews.

The Hope Township, Michigan, native initially performed under the moniker “Hope” before changing back to her real name. She was assigned to NXT and trained at the WWE Performance Center before moving onto NXT. She performed on the brand until 2016 when she was released.

She married wrestler Wesley Blake, whose real name is Cory Weston, in 2017.

Sara Lee and Blake had three children together, with their daughter, Piper Weston, born on May 1, 2017. Their second child together, Brady, was born on February 27, 2019.

In her latest social media post, published on Instagram, Sara  Lee had written about her recent return to the gym for the first time since having sinusitis. “I’m celebrating finally being healthy enough to go to the gym two days in a row. The first sinus infection of my life wrecked me.”

Her cause of death wasn’t revealed.

The pro wrestling industry sent condolences to her family on social media.

My Husband Impregnated My Cousin Because We Couldn’t Have Children, But They Are Now HIV Positive

‘Take your apology and go f**k yourself’: Britney Spears lashes out at mom Lynne in furious rant

Drew Barrymore Reveals That She’s Not Ready to Date as…

Toyin Abraham threatens Toyin Lawani after she wore an…

The man that can resist sexual temptation has not been born…