Angela Bassett and Courtney B. Vance are celebrating the love they share after 25 years of marriage.

The Hollywood couple posted footage from an anniversary party they had on Oct. 1 ahead of their actual anniversary on the 12th.

Bassett and Vance uploaded identical posts with the same loving reflection on their union.

“25 years… When we first got married, we couldn’t wait to say we made it to 10 years! Now look at how far we’ve come!” the couple captioned their mutual post. “As Frankie says, ‘Joy and pain are like sunshine and rain…’ Whew! He sure was right!” 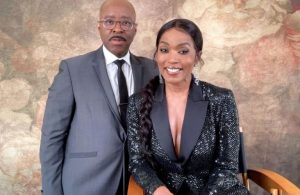 “We’ve had ups, we’ve had downs; we gained two amazing children, but lost cherished family members and friends…,” the statement continued. “We’ve had successes, we’ve had failures; we’ve had spectacular wins, we’ve had devastating losses…. But through it all there’s been one, beautiful constant: We’ve always had each other!”

Angela Bassett and Vance shared a dance and stood side by side as they warmly thanked their attendees for being witnesses to their love.

“Thank you to each and every soul and soul that’s here, every face that I glance upon. You mean so much to us,” said Bassett.

Angela Bassett married actor Courtney B. Vance in 1997. They first met at Yale School of Drama, then became a couple over a decade later after their paths crossed again in Los Angeles.

In the summer of 2005, they starred together in a production of His Girl Friday at the Guthrie Theater in Minneapolis, Minnesota. The couple’s twins – son Slater Josiah Vance and daughter Bronwyn Golden Vance – were carried by a surrogate.

Congratulations to the power couple on their milestone wedding anniversary. We wish them continued success, romance and happiness in their future.

Chadwick Boseman: Women all over the world mourn the…

“It is spiritually bad to use a divorcee as your bridesmaid”…