Women of colour who have had a mastectomy are for the first time to be offered soft prosthetics with a range of realistic skin colours.

Research indicates the trauma of breast surgery can be lessened if the patient has an appropriate “softie”.

Veronica Parke, 64, from London, was diagnosed with breast cancer in September 2020 and had a mastectomy in March 2021 at the Royal Marsden. After originally being given a softie that didn’t match her skin tone, she recently became one of the first women of colour to receive one that did.

Ms Parke said: “I was too ill to have my breast reconstructed immediately after surgery, and I thought having a softie would compensate. 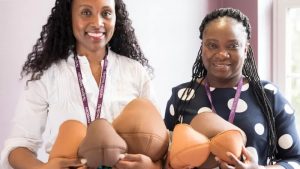 “However, the product I was initially offered, which was as pale as can be, didn’t match my skin tone, so I didn’t use it. This affected how I dressed, and I wore everything loose so people couldn’t see my shape.

“After a mastectomy, you can feel disfigured, and you want something that helps you feel normal again. I wore the new softie it for the first time when my daughters took me out for a birthday meal. It was lovely being able to wear clothes more my size as the softie blends in so well with my skin tone.”

What is a softie?

Women who have had a mastectomy are often provided with a “softie”. Some use them on a temporary basis while awaiting reconstructive surgery or a permanent silicon prosthetic, but many use them long term as they can be more comfortable than other options.

A softie – also sometimes called a cumfie – is a lightweight fabric breast shape to be worn in a bra.

They are very soft and will not put pressure on a wound so can be worn immediately after an operation.

They can be covered to match a skin tone.

Breast surgeon at the Royal Marsden, Natalie Johnson, called the product “a true representation of patient-centred care“, and specialist nurse Sarah Adomah said: “Being given a softie in an inappropriate skin tone can make having a mastectomy even more upsetting.

“Ensuring that all breast cancer patients are given a softie that’s right for them is vital and I’m so proud to have helped bridge this gap in care.”

The products are currently available for patients at the hospital in Chelsea, west London, but the Royal Marsden hopes to roll them out more widely across the UK, in conjunction with lingerie and hosiery company Nubian Skin.

“I don get husband, y’all be safe out there” — Israel DMW’s wife, Courage tells single ladies

Do you know your partner’s love language?

What you should know about anxiety disorder

10 wrong ways to apologize to your partner