Victoria is a woman who says that she has always been curious about the possibility of dating other women. The only problem? She is deeply in love with her fiance Martin.

She didn’t want her marriage to be started with lies and dishonesty so she told him all about her feelings.

“I didn’t want to leave Martin and couldn’t imagine my life without him, so I told him. I believe that true love is honest.” – she says.

At first things weren’t going so great and they started doubting the strength of their relationship, but eventually, they decided not to cancel their scheduled wedding.

They were really determined to make it work. In this period they agreed that Victoria could explore her feelings towards other women with one condition only: to be honest about her experiences with her husband. 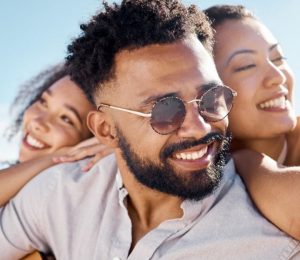 Victoria then traveled to the USA to meet up with her longtime friend Nia. Before they knew it, their friendship and the platonic relationship blossomed into something more including Victoria’s husband.

The new ‘throuple’ as an official term for “3 people in an intimate and loving relationship” discovered that this unconventional relationship really works for them.

HAVE YOU ever loved two people in your life and thought to yourself, “I wish we could all just date?” Well, you can! It’s called being in a throuple. The word, which is a portmanteau of “three-person” and “couple,” is a form of polyamory where three partners are in a relationship with each another.

There are many reasons people might seek out three-way relationships. Often, they form when a person joins a pre-existing couple.

“Sometimes, a long-term couple wants to bring new and fresh energy into the relationship,” says Joe Kort, Ph.D., LMSW, certified sex therapist and director of The Center for Relationship and Sexual Health. “Other times, a couple doesn’t want to rely on only one person for their emotional and sexual needs, so having a third allows for that.”

A Throuple can also be formed when one person falls in love with two individual people and wants to be with them both. (Of course, everyone involved in this relationship needs to consent to the arrangement.)

Carly Simon Loses Both Sisters to Cancer, They Died One Day Apart

I’m a 330-pound model in love with a skinny man, size doesn’t matter

Sola Sobowale thanks Kemi Adetiba for believing in her