Shonda Rhimes is opening up about the reason why network executives believed Grey’s Anatomy would fail before the show premiered in 2005.

The ABC medical drama’s creator recalled a meeting with the executives, who were skeptical that the show would find an audience as it was the first of its kind on television.

“It feels really obvious now, I think, but at the time, you have to remember, there had never been a show in which there was a lead character who owned her sexuality on network television,” Rhimes, 52, said in a preview of Tuesday’s 9 to 5ish with the Skimm podcast shared with E! News.

In the pilot episode, viewers saw Meredith Grey (Ellen Pompeo) sleep with a man who turns out to be Derek Shepherd (Patrick Dempsey), a new surgeon at Grey Sloan Memorial Hospital, where she is also starting as an intern.

“I remember getting called into a room full of old men to tell me that the show was a problem,” Shonda Rhimes recalled. “Because nobody was gonna watch a show about a woman who would sleep with a man the night before her first day of work, and they were dead serious.” 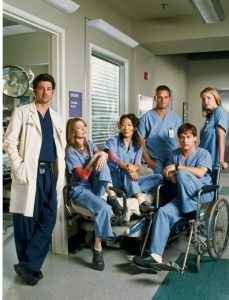 In the meeting, Rhimes’ creative partner Betsy Beers said she countered their argument by sharing how the story was actually based on her real life.

“Shonda looked like she wanted to throw up, which was the appropriate response to this, but I couldn’t help it, and I said, ‘Oh, that’s me. I did that. That’s absolutely me,'” Beers explained. “I remember I was saying that and I just blurted it out, because it was true.”

After the revelation, Shonda Rhimes recalled how the executives “could not get out of that room fast enough.” She added, “They didn’t know what to do. They were like, ‘These are these kinds of women we don’t like.'”

Rhimes and Beers turned out to be correct about the show’s success as Grey’s Anatomy celebrated its 400th episode in May.

At the time, Disney — the parent company of ABC — shared photos on Instagram, revealing how the cast and crew was commemorating the milestone together. Pompeo, 52, was among those to deliver a speech during the cake-cutting ceremony.

“You don’t get to this many episodes without this level of passion,” she said, per the caption shared by the network’s Instagram Story.

Nicole Byer Reveals a Casting Director Asked Her to…

US Senate Is Expected To Confirm Judge Ketanji Brown Jackson…