Janeshia Adams-Ginyard paid tribute to late Black Panther star Chadwick Boseman at the premiere of the Marvel sequel on Wednesday.

The actress and pro-wrestler had a detailed portrait of Boseman’s face painted on her back, which she displayed on the purple carpet for Black Panther: Wakanda Forever at the Dolby theatre in Los Angeles, California.

Adams-Ginyard, 38, has over 50 credits as a stunt double with roles in the MCU as a member of the Dora Milaje in the first Black Panther movie, Avengers: Infinity War and Falcon and the Winter Soilder. 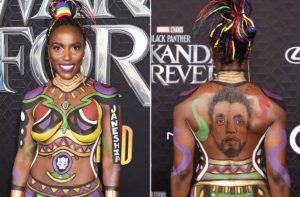 In Black Panther: Wakanda Forever, her warrior finally gets a character name: Nomble.

Boseman died in 2020 at age 43 to colon cancer. After his 2016 diagnosis, he kept the news private for four years until his death, which shocked friends and fans around the world.

“I was at a point when I was like, ‘I’m walking away from this business.’ I didn’t know if I could make another movie period, [let alone] another Black Panther movie, because it hurt a lot,” director Ryan Coogler told Entertainment Weekly earlier this month. “I was like, ‘Man, how could I open myself up to feeling like this again?'”

In the days following Boseman’s death, Coogler was “poring over a lot of our conversations that we had, towards what I realized was the end of his life. I decided that it made more sense to keep going.”

After much speculation, it was recently revealed that Boseman’s title role in the film would be written out, a decision that costars like Lupita Nyong’o agreed with.

“I dreaded the start of this shoot because I could not imagine how we would proceed without Chadwick. It was unfathomable to me,” Nyong’o, 39, told EW. “But Ryan managed to honor his life and his role in both the film and our lives with his moving, truthful and clear vision.”

Four Single Moms Bought A House Together To Raise Their Kids

‘Doctors said I was too fat to have triplets and asked…