Popular singer, Rihanna have shown unreserved love to Nigerian singer, Temilade Openiyi, popularly known as Tems, after they collaborated on a song.

Tems co-wrote Rihanna’s new song “Lift Me Up”, a soundtrack for the movie, ‘Black Panther: Wakanda Forever.’ The track is Rihanna’s comeback single after a six-year break from the music industry.

Taking to her Instagram page to officially announce her contribution to the song, Tems shared the cover design and said she is blessed to have written the song in honour of late singer, Chadwick Boseman.

“Blessed to have written this song in honour of Chadwick Boseman and even more blessed to hear the baddest @badgalriri voice it to perfection.” 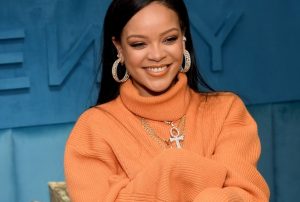 Interestingly, Rihanna took to the comment section to applaud Tems’ songwriting prowess. She commented, “It’s the pen for me. Love to you sistren.”

The soundtrack album for ‘Black Panther: Wakanda Forever’ will be released on 4 November.

The song is now available for pre-save on Spotify and Apple Music.

Rihanna, whom Forbes named the world’s wealthiest female musician in August 2021, is an award-winning Barbadian singer, actress, and businesswoman.

Most of her fortune, estimated by Forbes, comes not from chart-topping singles but from the success of her cosmetics empire.

Rihanna, 34, launched Fenty Beauty in 2017 with a dream to create a cosmetics company that made “women everywhere [feel] included.”

She rose to prominence after she was featured on Wizkid‘s 2020 single, “Essence“, which reached the top ten of the Billboard Hot 100 after the release of a remixed version with an additional feature from Justin Bieber, and earned her a Grammy Award nomination. That same year, she was featured on Drake’s song, “Fountains“.

On 14 December 2020, Tems was arrested alongside fellow Nigerian singer Omah Lay after they performed in a show in Uganda. The Ugandan police authority identified violation of COVID-19 lockdown protocols as the reason for their arrests, but the two artists felt they were set up. Two days later, the Ugandan government released them, apologized for the arrests, and dropped the charges.

“I never thought I’d be 46, divorced, and having a baby on my own” – Former CNN correspondent, Isha Sesay says

Abusive boyfriend convicted of the premeditated murder of his ex-girlfriend

HER BROKEN SOUL 5: Living in a loveless marriage