Mary Sherman Morgan was a U.S. rocket fuel scientist credited with the invention of the liquid fuel Hydyne in 1957, which powered the Jupiter-C rocket that boosted the United States’ first satellite, Explorer 1.

Below are 10 things women should know about Mary Sherman Morgan:

1. The second youngest of six siblings, Mary Sherman was born to Michael and Dorothy Sherman on their farm in Ray, North Dakota.

She grew up in a family of bullying siblings and indifferent parents who kept her out of school to work on the farm. Social services stepped in and threatened to arrest Mary’s father unless he allowed her to attend school. The social worker then provided her with riding lessons and a horse to attend her one-roomed school house.

2. In 1939, she graduated as her high school’s valedictorian. She then enrolled at DeSales College in Toledo, Ohio as a chemistry major.

3. During Sherman’s college education, the Second World War broke out. As a result of men going overseas to fight, the United States soon developed a shortage of chemists and other scientists.

A local employment recruiter heard that Sherman had chemistry knowledge, and offered her a job at a factory in Sandusky, Ohio. He would not tell her what product the factory made, or what her job would be – only that she would be required to obtain a top secret security clearance.

Short on money, she decided to take the job even though it would mean having to postpone her degree. The job turned out to be at the Plum Brook Ordnance Works munitions factory, charged with the responsibility of manufacturing explosives trinitrotoluene (TNT), dinitrotoluene (DNT), and pentolite.

The site produced more than one billion pounds of ordnance throughout World War II. 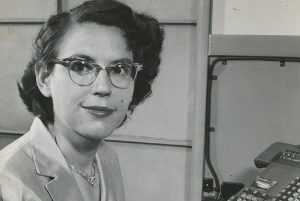 4. Mary Sherman Morgan became pregnant out of wedlock in 1943, a difficult dilemma in an era when such behavior was considered extremely shameful and women were often given back-alley abortions or hidden away from their friends and family.

5. At that time, she was living with her first cousin, Mary Hibbard, in Huron, Ohio. In 1944, she gave birth to a daughter, Mary G. Sherman, whom she later gave up for adoption to Hibbard and her husband, Irving. The child was renamed Ruth Esther.

6. After spending the war years designing explosives for the military, she applied for a job at North American Aviation, and was employed in their Rocketdyne Division, based in Canoga Park, California. Soon after being hired, she was promoted to the role of Theoretical Performance Specialist, which required her to mathematically calculate the expected performance of new rocket propellants. Out of 900 engineers, Mary Sherman Morgan was the only woman, and one of only a few without a college degree.

7. While working at North American Aviation, she met her future husband, George Richard Morgan, a Mechanical Engineering graduate from Caltech. Together, they had four children – George, Stephen, Monica, and Karen.

8. Morgan was assigned to lead a group of college interns at North American Aviation’s Rocketdyne Division. Due to her expertise and experience, Morgan’s work resulted in the birth of a new propellant, Hydyne.

Her son admitted that he knew surprisingly little about his mother’s life and work when she died, as she worked in an industry connected to defense and national security, and was limited in what she could discuss.

He had built and launched homemade rockets with friends in the Arizona desert, and as he recalled, “If I’d known how much expertise in rocketry my mother had, we could have asked her for help and saved ourselves a great deal of trouble.” The play was later turned into a book by the same name.

Woman, if you are the only one doing everything possible to make your marriage work, you are married to yourself

Liza Minnelli Makes a Surprise Appearance at 2022 Oscars to…

My husband is not a rapist declares Biodun Fatoyinbo’s…