Shanquella Robinson, who was found dead under mysterious circumstances inside a villa in Mexico’s Cabo San Lucas, seemed to be a free-spirited person as indicated by her last Instagram post.

The 25-year-old, who owned a braiding business in Charlotte, North Carolina, was holidaying in Mexico with her friends when she died on October 28.

It has been said that her dead body was found by a maid. A post-mortem examination reportedly revealed that Robinson died of multiple injuries on the spinal cord and atlas luxation. However, local authorities have ruled out the murder angle.

Meanwhile, the businesswoman’s unfortunate death led many people to her Instagram account, which boasts more than 51k followers. 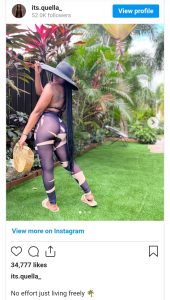 In her last post, Shanquella Robinson mentioned being ‘free’. The post has two photos of her posing in sunglasses, a bikini top, leggings, and a sun hat. The third picture was a text that said, “A busy girl, a paid girl, a blessed girl!” while the caption of the post read: “No effort just living freely🌴.”

A lot of people paid their tribute in the comment section of the Instagram post with a user writing: “Your spirit is unbelievable 🖤 words can’t even explain how perfect you is.” The second one said, “RIP 💔💔 This literally just sad 😢.” The third user shared, “So sorry this happened to you 🥹🙏🏾🙏🏾🙏🏾🙏🏾.” The fourth user noted, “May you be warmly received by your loved ones on the other side Beautiful. I’m so sorry they did this to you. You didn’t deserve this and they will pay.”

Another grieving comment stated: “Im sorry this happened to you babygirl ❤️😢 may your soul rest and your family find peace and justice!” “To the people who did this and reading this! The FBI and the Mexico Consulate have the case and rest ASSURE you are will Foil when it come to doing time in Mexico. I can assure you of that. Why that Monster be@t you like that NOTHING WARRANT those pπnches and the person filming is as HORRIBLE. You all will pay for THIS,” another comment read while referring to an unverified video going viral on the internet suggesting that Shanquella was severely beaten by a woman, believed to be one of her friends, in a room.

Shanquella Robinson’s Death Is Now Being Treated As Homicide

Nigerian men preach morals to women but they lack morals

Kandi Burruss Reflects on Having Suicidal Thoughts as a…

Nivea Says Lil Wayne Persuaded Her To Leave The Music…