It’s no secret that Meredith is moving to Boston on Grey’s Anatomy — a life path made all the more conclusive when lightning struck her Seattle home in the Nov. 10 fall finale.

A promo for the show’s return in February teased Meredith’s last day at the hospital where she spent most of her adult life. Still, Ellen Pompeo’s step away from the show was originally reported by Deadline as a “reduced onscreen presence,” and not an actual exit.

But on Nov. 17, Ellen Pompeo seemed to say goodbye to the series in an emotional Instagram post.

“I am eternally grateful and humbled by the love and support you have all shown me, Meredith GREY and the show for 19 seasons. None of it… would have been possible without the best fans in the world.” 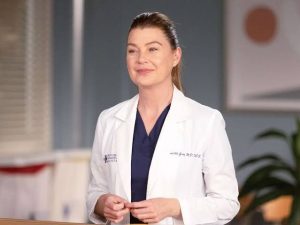 Pompeo’s message further celebrated her avid fan base. “You all are RIDERS and you all have made the ride so fun and ICONIC! I love you madly and appreciate you right back,” she said.

“This isn’t your first time on the rollercoaster… you know the show must go on and I’ll definitely be back to visit.” She paired the goodbye with a snap of her in front of a neon “All You Need is Love” sign.

Ellen Pompeo previously told Deadline that she’d “always be a part” of Grey’s Anatomy. “I’m an exec producer on that show, I’ve spent two decades of my career on that show, it’s my heart and soul, and I’ll never truly be gone as long as that show’s on the air,” she said.

She also said she’d be back for the finale but didn’t specify whether she meant the end of the season or the series. And on that note, is Grey’s Anatomy ending now that Pompeo is saying goodbye? That’s unclear for now.

If you have been following Ellen Pompeo for a while, you may not be too surprised to hear that she’s stepping away from the show. Over the years, the actor has been vocal about her desire to leave Grey’s Anatomy and put her energy somewhere new — and as recently as 2021, she told Entertainment Tonight that she had “been trying to get away for years.”

Ladies, take time to find out what a man wants from you

Simone Biles says a flight attendant mistook her for a child…

Jude Ighalo and wife Sonia throw missiles at each other on…