When a man truly wants to marry you, he will not delay, and will even borrow money to marry you” – Actress, Christabel Egbenya says

Nollywood actress, Christabel Egbenya told women that if truly a man loves them and wants to marry them, they would waste no time in getting things done.

According to the actress, the man would go as far as borrowing money just to make sure he goes through with their marital rites in due time. 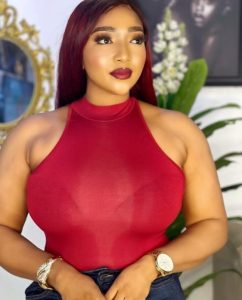 While a couple of netizens took to the comment section to agree with the actress saying she’s stating “facts”, others were of the notion that not a lot of young men love to borrow money to get married, cause it makes the couple start their new marriage in debt.

In April, Christabel Egbenya refuted claims that she welcomed a child with actor, Yul Edochie.

The new mum, during an Instagram live session, addressed claims that she welcomed her newborn child with the movie director.

Even though it was unclear why the actress was being linked to the actor, Christabel Egbenya clarified that she’s not Yul’s second wife, as some viral reports alleged. She revealed her husband is Mark Onumajuru and the baby is their first child together.

“I’m not Yul’s second wife ooo, na my pikin I born oo, this is my husband’s first child oo, not Yul Edochie’s own. Biko my husband is Mark Onumajuru”, she said.

‘Any man who doesn’t own house before marriage doesn’t have a future’ says Actress, Lilian Afegbai

What do young men bring into marriages these days?