Nollywood actress Eniola Badmus has reacted to reports of Davido and Chioma’s marriage. She posted a picture of the couple on Instagram.

It was reported that the couple confirmed the rumours of their marriage at Davido’s uncle’s inauguration in Osun State.

Davido and Chioma, who made their first public appearance at the highly publicized event after the death of their son, were the cynosure of all eyes as they were spotted with their wedding rings.

Taking to her Instagram page, Eniola Badmus hailed the couple. 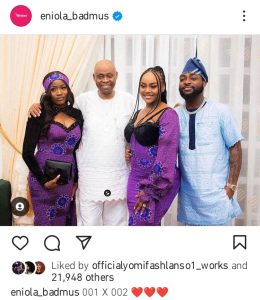 Sharing a photo of them with Governor Adeleke and Chioma’s sister, she captioned it:

This is coming weeks after she came under fire for monetizing Ifeanyi’s death.

Eniola Badmus was one of the first celebrities that announced the death of Ifeanyi Adeleke in a cryptic message.

Moments after her post, Nigerians stormed the comment section, accusing her of using the boy’s death as a means of gaining more popularity. Others opined that it was insensitive to announce the death of a child before confirmation from the parents.

The 38-year-old also came under fire after posting now-deleted videos about the death of Ifeanyi on her YouTube channel. She created over four contents centered on Ifeanyi’s death.

Many who were quick to view the content before she took it down, mercilessly dragged her on social media. They called her and opportunist who used a little boy’s death to make money.

Later, it was reported that she was arrested by the police because she was the one who allegedly called Davido’s nanny the night Ifeanyi drowned but the police was quick to dismiss the story and said it wasn’t true.

“Why must women be the ones to let go?” Feminist asks after Rita Dominic takes up husband’s surname

Ladies, co-inhabiting with a man can mess up your life

Man released on bail after assaulting his girlfriend kills…