“Why must women be the ones to let go?” Feminist asks after Rita Dominic takes up husband’s surname

A Ghanaian feminist has knocked actress, Rita Dominic as she reacts to the news of the famous actress taking up her husband’s surname.

The actress changed her Instagram bio to reflect her husband’s surname.

While noting the change, the feminist and media personality queried why women always have to be the ones to make such changes when they get married.

She pointed out how Rita Dominic, who is a household name, had to change her identity to that of her husband.

Why, why most women always have to be the ones letting go after marriage?”.

On Monday, November 28th, following her wedding over the weekend, Rita Dominic took her husband’s surname, Anosike. She made some changes on her Instagram bio. 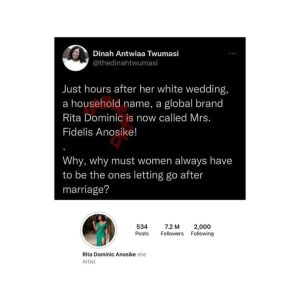 A quick check on her Instagram page revealed that the newly married actress had added her husband’s surname to her name. Her Instagram bio changed from Rita Dominic to Rita Dominic Anosike.

Rita Dominic made headlines this year, following her two part grand wedding ceremony. She shut down the internet with her two part fairytale traditional and white wedding.

On Saturday, November 26th, families, friends, and colleagues of the couple attended their white wedding ceremony in North Yorkshire in England.

The likes of Onyii Alex, Uche Jombo, Uche Elendu, Okey Bakassi, Kate Henshaw, and other A- actresses where present at the event.

Rapists should be blamed for rape, not victims

Teenage girl arrested for turning down a man’s sexual…