US-based Nigerian singer, Kechi Okwuchi, has taken to Twitter to mark the 17th anniversary of the Sosoliso plane crash she survived on December 10, 2005.

Recall that Kechi was one of the 110 people on board the ill-fated flight that left Abuja and crash-landed at Port Harcourt International Airport. The plane slammed to the ground and burst into flames.

Many passengers survived the initial impact but died in the resulting fire. Out of the 103 passengers and 7 crew members, seven survivors were rescued and taken to hospitals, but sadly only two people survived. Kechi Okwuchi was one of the survivors. 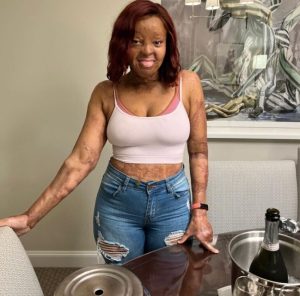 Taking to Twitter today, December 10, to remember the ill-fated flight, the 33-year-old author recounted some of the amazing things she has accomplished after the crash, and mourned those who lost their lives.

“To the 60 angels: 17 yrs since the crash & I have 60 reasons to keep on. This year I published a book & became an MBA graduate. I’ll use these things to make you even prouder. To each soul that was lost 17 yrs ago today, our memories of you are fond & you will never be forgotten.”

Kechi Okwuchi (born October 29, 1989) is a Nigerian-American singer and motivational speaker. She was one of the two survivors in the Sosoliso Airlines Flight 1145 crash on December 10, 2005 and a finalist at the twelfth season of America’s Got Talent in 2017.

Okwuchi was one of the two survivors in the Sosoliso Airlines Flight 1145 crash on December 10, 2005 that claimed 107 lives, 59 of which were her school mates from Loyola Jesuit College. She received third degree burns over 65% of her body and was given a 30% chance of survival.

Kechi was only 16 when in 2005 she was on a plane home from boarding school for the Christmas holidays, traveling between two cities in her home country of Nigeria—Abuja and Port Harcourt.

The plane, which was also bringing 60 of her classmates, home to their families, crash-landed at Port Harcourt airport killing all but two passengers, including Kechi. Kechi suffered third degree burns over 65 percent of her body.

In 2007 she and her family moved to Texas to be near Shriner’s Hospital for Children in Galveston, where she received treatment.

Since then, she’s endured more than 100 surgeries to reconstruct her burn injuries or make them more comfortable to live with.

After the Sosoliso plane crash, Okwuchi was air-lifted to Milpark Hospital in Johannesburg, South Africa for immediate medical attention and treatment, and later to Shriners Hospitals for Children in Galveston, Texas, United States where she has undergone over a hundred reconstructive surgeries.

‘If you’re impregnated by another man, open up to your husband, he might accept the child’ – Christabel Egbenya urges women

10 facts about Ursula Burns that will inspire women to be…

The internet reacts to rumours that Rihanna and ASAP Rocky…