Six years ago, Teddy Edwardes (@teddyedwardes) had a bad experience at a nightclub. Apparently, some dude was being a jerk and refused to let her have a good time.

So she had an idea: Start a women-only nightclub with a focus on the LGBTQ+ community.

And it worked! She started a club called LICK in London, which has grown to be the biggest women-only nightclub in the country. 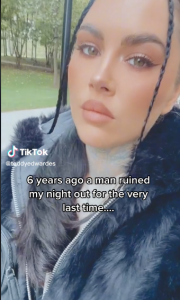 According to Teddy, the women-only nightclub draws 2,000 women a night. She told BuzzFeed:  “I started LICK because I just had enough of going to straight clubs and every single time having some sort of issue with men. The final straw that broke the camel’s back was: I walked into my friend’s album label launch in Shoreditch and within seconds, a man grabbed my ponytail and pulled me backward across the club all the way to the bar because he ‘wanted to buy me a drink.’”

There were growing pains though. She told BuzzFeed that “For the first three years, I barely made a penny. I did it out of pure passion. My partner at the time told me I’d never make any money from it and I should get a normal job in a café. No venues wanted to work with us, the one venue we did have would often cancel last minute, and I personally was banned from most venues in Soho because they collectively agreed I was ‘bringing the wrong crowd to the area.’”

But things picked up and now it’s one of the hottest spots in town. Teddy told BuzzFeed: “Men need to become better allies by educating themselves and the other men around them by speaking up when something isn’t right. The only people that can change the issue with men, are men.”

“My Husband Started Acting Strange After My Sister’s Pregnancy Announcement”

Megan Thee Stallion Tearfully Opens Up About Life After Her…

When you know your place in people’s lives, you…