According to the reality TV star on her Twitter page, she said contrary to what Nedu said, many women have come out of the house to become actresses, start businesses and build a solid brand.

Angel wrote, “This is all so old and boring. I don’t know why men can’t just mind their business.

“So many women have come out of big brother to become actresses, start businesses and actually have a solid brand but because y’all are so misogynistic and uninformed, you say rubbish.

“Every time it’s a man in the industry sl#t shaming women, you’re over 40. If you want a sugar daddy, then maybe get one. Nobody is stopping you. 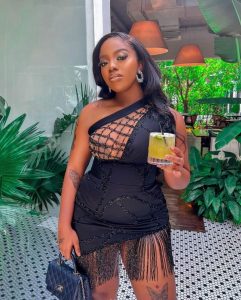 “Look how happy he’s saying it. You people will shame women for having consensual s£x and be surprised when men s£xually assault women.

“Men are very jealous of women because I don’t understand why you are upset about a grown woman’s v@gina.

“That’s why blogs thrive on bringing down the women in big brother, some of the most hardworking people I’ve met, especially the ones you guys sl#t shame a lot, sh#t up losers.

“Like this topic pisses me off so much, then you people will come online and say “Nawa o, so she fvcks for money and she’s oppressing us, don’t believe everything on social media” nobody is oppressing you, my dear, you’re just a jealous rat.”

If women go into the Big Brother Naija house to sell their kpekus, what do the guys go there to do? To play ball or just chill?

Men like Nedu who get high on sl#t shaming women don’t have anything going for them and that is why the only way they can remain relevant is to take a swipe at women who are making more money than they do.

How to salvage your marriage after the loss of a child

“Prince Kpokpogri, is threatening to expose my…

Cheryl Burke Files for Divorce from Matthew Lawrence After…