Temilade ‘Tems’ Openiyi has received an Oscar nomination for ‘Lift Me Up’, which served as the lead single from the soundtrack of ‘Black Panther: Wakanda Forever’, in the ‘Best Original Song’ category of the 2023 Academy Awards held on January 24, 2023.

The song titled ”Lift Me Up” was written by Tems, Oscar winner Ludwig Göransson, Rihanna, and Ryan Coogler.

Voting for the 2023 Oscars will run from March 2nd -7th. The 2023 Oscar award is set to hold on Sunday, March 12 at the Dolby Theater and it will be hosted by comedian and talk show host Jimmy Kimmel.

The Songstress, who has continued to witness a meteoric rise to the top of the global music scene since her featured song with Afrobeat star Wizkid ‘Essence’ became a global hit, kicked off her 2023 with a call from the OG D-o-g-g, after working with Rihanna, Beyonce, Drake, Future, and many others in 2022. 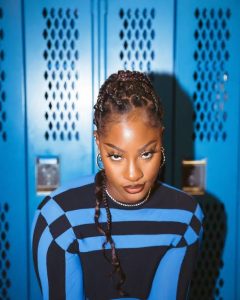 In the clip which made rounds on social media, Snopp Dogg is seen sending word out to Tems for a feature.

According to the rapper, aside from being a big fan of the songstress, his family also listens to her songs regularly.

Snopp Dogg in the video said:

“TEMS, YOU KNOW I’M A FAN… LET’S MAKE A FVCKING HIT RECORD GIRL. YOU’VE BEEN HAVING MY WHOLE FAMILY DANCING TO YOUR SHII… I NEED ONE WITH YOU.”

Temilade Openiyi, was born on 11 June 1995 in Lagos, Nigeria. Tems resided in Ilupeju before moving to Lekki then Ajah. Tems attended Dowen College for her tertiary education. At school, she was noticed by her music teacher and learned to play the piano. She practiced singing with her brother and often used his guitar accompaniment.

In 2018, Tems quit her job to pursue a career in music. She began to learn self production skills on YouTube and on 18 July 2018, she released her debut single, “Mr Rebel”, a song which she produced by herself. On 7 August 2019, she released the single “Try Me”.

Throughout her career, Tems has received many accolades, including two NAACP Image Awards, two BET Awards and two Soul Train Music Awards.Tems became one of five notable Nigerian women who made history in the month of July, as she won a BET award.

“As long as he gives me money, I don’t care if he’s old” – Teenage actress, Mercy…

‘Any man who doesn’t own house before marriage doesn’t…

How absent fathers are hurting their children