September 16 is annual Global Female Condom Day – a day of education and advocacy dedicated to female condoms. It is also a day set aside to increase awareness, access, and use of female condoms. Today, women all over the world will visualize a future for female condoms.

Female condoms may be one of the best kept secrets in reproductive health. Even though the first female condom product was introduced about two decades ago, female condoms are still not well-known or widely available to most women and men worldwide.

These five secrets will increase your female condom knowledge and advocate for improved access to this powerful tool for feminine protection. 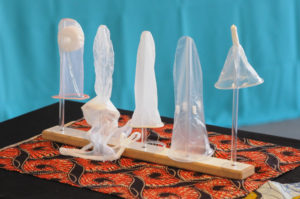 1. The female condom has a unique place in the prevention toolkit

The female condom is the only available woman-initiated method designed to provide “dual protection” from unintended pregnancy and sexually transmitted infections (STIs), and could go a long way in addressing unmet need among women. An estimated 222 million women in developing countries want to prevent pregnancy but aren’t using contraception. Why? Fear of side effects or infrequent sex are two of the main concerns—both which could be addressed by female condoms because they don’t contain hormones and can be used only when needed. HIV is the leading cause of death and disability among women of reproductive age globally, underscoring the need for prevention tools designed with women’s realities in mind. Female condoms can put the power of protection in women’s hands right now.

3. There are several different female condom products on the market

There are many different types of female condoms that exist. Some are latex-free, and all are hormone-free. The most well-known female condom is the FC2®, which is available in more than 130 countries worldwide, including the United States. Other products are beginning to enter the market that are designed to improve acceptability and/or reduce costs. One example is the Woman’s Condom, a female condom developed by PATH, CONRAD, and local research partners through a user-centered process to be easy to use and comfortable to both partners.

4. Female condoms can be a cost-effective form of protection

Female condoms are often described as expensive. But as the saying goes, a pound of prevention is worth a lifetime of cure. In fact, female condoms are a cost-effective public health intervention when compared to the costs of HIV treatment.

More types of condoms means more protected sex. Studies in several countries have found that levels of protected sex increase when female condoms are added to the method mix, potentially reducing the risk of HIV infection and unwanted pregnancies.

When both types of condoms are available, consistent users often switch between female and male condom use—boosting the overall number of condoms used.

But remember, never use a female and male condom at the same time because this can lead to one or both condoms breaking.

5 causes of chronic yeast infection every woman should know

10 things women should know about Osteoporosis

What Nigerian women can learn from Keke Palmer’s…

There’s no right or wrong way to grieve