Nigerian police beat and arrested demonstrators today as some youths protested over the reopening of the site where activists denouncing police brutality were shot last year in Lagos.

The Nigerian military has denied shooting live rounds and police have also denied involvement in the shooting of unarmed protesters last year.

There was a heavy presence of armed police officers on Saturday morning at the toll gate, where a group of about 15 protesters gathered despite calls by the government this week to scrap the demonstration, witnesses said. 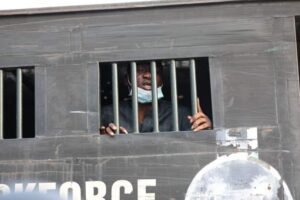 At least six of the protesters were beaten with truncheons and arrested before being driven away in police vans. Popular comedy skit maker Mr. Debo Macaroni is among the people arrested by the police.

“Lekki toll gate should be made a museum of resistance and not a monument for money-making,” said a 24-year-old Damilare Adebola who spoke from the police van where he was being held.

A Lagos police spokesman said in a text message he was unaware of the arrests but would look into accusations that activists had been manhandled. 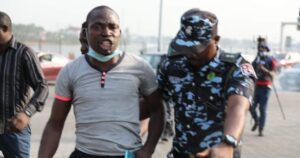 Yesterday, one of the two youth members of a Lagos state panel investigating the October shootings resigned, citing “undue intimidation of peaceful protesters” and the panel’s vote to reopen the toll gate – a source of revenue for the state government – before the probe had been finished.

For many of the protesters and protest organisers, this is sacred ground – so they cannot understand why the Lagos state government want to reopen the toll gate without getting justice for the victims who were killed last October.

It is clear that the Lagos state government is looking at the issue from the revenue point of view. They are losing millions of dollars every week due to the non-collection of tolls here. They don’t care about the lives that were cut short there last year.

Lekki toll gate shouldn’t be reopened without getting justice for unarmed protesters who were killed there on October 20, 2020.

Mary Wilson, founding member of The Supremes, dies at 76

10 signs of a toxic friendship every Nigerian woman should…

Mila Kunis and Ashton Kutcher vow to match $3 million in…

I take permission from my parents to go out these days…