Vjosa Osmani, the President of Kosovo is the second female leader in Kosovo since the Balkan nation declared independence from Serbia 13 years ago.

Here are 10 things Nigerian women should know about madam president:

2. Vjosa Osmani was raised in the divided city of Mitrovica. She speaks Albanian, Spanish, Serbian and Turkish. She grew up with four siblings, and completed her primary and secondary education in her hometown. The Kosovo war occurred while Osmani was a teenager, and she has clear memories of a soldier forcing an AK- 47 rifle into her mouth after her home in Mitrovica had been raided.

3. She became a political activist and has published books, articles, monographs and papers in the field of International and Commercial Law, in Albanian and English.

4. Osmani worked as an advisor to the president of Kosovo before she was elected to the Assembly.

5. Osmani held the position of Speaker of the Assembly from February 2020 to March 2021, and also served as acting president between November 2020 and March 2021 after the resignation of President Hashim Thaci. 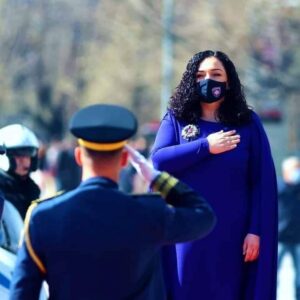 6. She has run successfully on an anti- corruption platform, and has expressed a desire to normalize relations between Kosovo and Serbia.

8. Osmani contributed to the independence of Kosovo as the president’s representative for the Constitution Commission, the body that prepared the Kosovan constitution. She represented Kosovo in a case at the International Court of Justice where she defended the legality of Kosovo’s independence.

9. During Osmani’s master’s studies at the University of Pittsburgh, the university presented her with the Excellence for the Future Award twice. Later, in 2017, the university awarded her the Sheth International Achievement Award for her contribution to democracy and human rights.

10. In 2012, Osmani married Prindon Sadriu, an employee of the Ministry of Foreign Affairs. They have twin daughters.

Sara Blakely, Spank Founder encourages those whose dreams have been derailed as she…

Is preserving the sanctity of marriage the duty of Nigerian…

Nigerian women can make names for themselves by pursuing…

10 life commandments for women of all ages