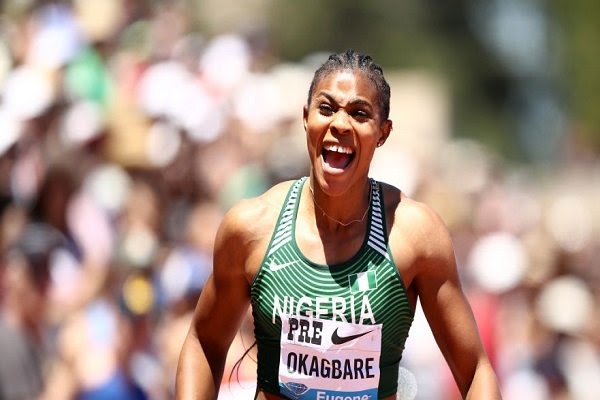 Nigeria’s Queen of the tracks, Blessing Okagbare continued her splendid build-up to the Tokyo Olympics as she ran an impressive 10.98 secs to win the 100m women’s event at the P-T-S Meeting in Samorin, in the Slovak Republic.

Okagbare’s winning time was a Meet Record as no other woman has ever run under 11 seconds in the Meet held in the Eastern European country.

According to World Athletics website, the world and Olympic medallist dominated the race, winning by almost half a second in 10.98 (-0.1m/s) with Ireland’s Ciara Neville a distant second (11.47).

After her historic feat, a delighted Blessing Okagbare said she was not only excited to win but also honoured to be the first woman ever to run under 11 seconds at Wednesday’s Meet.

“Thank God for another healthy race/win today,” the Nigerian 100 and 200m record holder wrote on her Facebook page.

Before going below 11 seconds again on Wednesday, Okagbare ran her first sub-11 seconds of the season at the USTAF invitational in Eugene, Oregon in April before scorching to a 10.90 seconds season’s best at the Wanda Diamond League meeting in Doha, Qatar last week.

This is the 21st time that Okagbare has run under 11 seconds in her career; a feat no Nigerian athlete is anywhere close to replicating and a testimony to the consistency of the University of Texas, El Paso alumni.

The first and only Nigerian to win a track and field event medals at the World Athletics Championship, Blessing Okagbare broke the 11 seconds barrier for the first time in her career at the Crystal Palace Aviva London Grand Prix in Crystal Palace, London on July 14, 2012 when she ran 10.99 seconds in heat one of the meeting before running 11.01 seconds to win in the final.

She raced inside 11 seconds three more times that year, setting new personal best on each occasion with the 10.92 performance in the semifinal of the event at the Olympics in London her lifetime best to close the year.

In 2013, Blessing Okagbare broke 11 seconds thrice with two of them in historic fashions. She started the season with a huge but wind-aided 10.75 seconds in June at the Prefontaine Classic (Diamond League) at the Hayward Field in Eugene, Oregon, USA.