Greek-Nigerian professional basketball player, Giannis Sina Antetokounmpo guided his team, Milwaukee Bucks to the 2021 NBA Championship where they faced off against Phoenix Suns.

Giannis Antetokounmpo scored 50 points in a series, clinching 105-98 Game 6 victory that ended the Bucks’ 50-year title drought and cemented his legacy among the pantheon of Milwaukee Bucks’ greats.

The last time the Bucks won a Championship was in 1971 when Abdul Kareem Abdul-Jabbar led them to their first championship.

Giannis Antetokounmpo, the two-time MVP finished the game with one of the most impressive stat lines in NBA Finals history – 50 points, 14 rebounds, and five blocks. 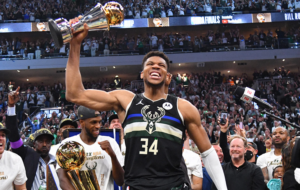 He becomes the seventh player in NBA history to score 50-plus points in a Finals game. He also accounted for 47.6 percent of Milwaukee’s points on Tuesday night which is the fourth-highest in a Finals game in the shot-clock era.

Michael Jordan and Elgin Baylor are the only players to record a higher percentage during that span. As a result of his performance throughout the series, Antetokounmpo was named Finals MVP.

“I want to thank Milwaukee for believing in me, thank my teammates,” said Antetokounmpo after accepting the Finals MVP award. “They played hard every freaking game. I trusted this team. I wanted to do it here in this city, I wanted to do it with these guys, so I’m happy. I’m happy that we were able to get it done.”

“No matter whatever you feel, when you feel down, when things look like it might not happen for you, you might not make it — your career might be basketball, it might be anything — just believe in what you’re doing. Keep working. Don’t let nobody tell you what you can’t be and what you cannot do.

This should make every person, every kid, everybody around the world believe in their dreams,” he added.

He was the star of these finals in every way, from his powerful play on the court to his humble thoughts in interviews to even taking time after the win to find children to high-five amid the celebrations.

Sandra Iheuwa updates her bio to ‘engaged to a…

The length of marriage doesn’t make it successful