Anne Frank wrote the most famous testimony about the horror of the Holocaust. According to Anne’s organization, she remained hidden from the Nazis during the occupation of the Netherlands in 1942 and was discovered two years later.

Her diary was translated into more than 80 languages and remains one of the best-selling books, regardless of the passage of time. Anne died in the Bergen-Belsen concentration camp in 1945.

Frank wrote the book when she was only 14 years old. Her personal account was based on the events of the war and is one of the most moving and necessary in history. World War II came into Anne’s life when she was 10 years old and soon after Germany invaded all around her, leading her family to try to flee as Jews. 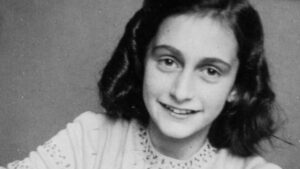 3 audiovisual productions on the life of Anne Frank

1. The Diary of Anne Frank

It is an American drama directed by George Stevens in 1959. The screenplay -written by Frances Goodrich and Albert Hackett- is based on the Pulitzer Prize-winning play in 1959, which was generated from the diary that little Anne had written. It won multiple Oscars, with Shelley Winters winning Best Supporting Actress.

The story centers on Otto Frank, a former prisoner of a Nazi concentration camp, who returns to the place where he and his family were hiding. There he receives his daughter’s diary and finds the story of how Otto hid his family in an attic from Gestapo persecution.

It is one of the most current productions centered on the life of the chronicler. Netflix released the film on February 4, 2021. At the time it was on the podium of the most watched and every day it adds more reproductions. Aiko Beemsterboer plays Anne, while Hannah is played by Josephine Arendsen.

The plot is based on the real-life friendship of Anne and Hannah Goslar, from the Nazi occupation in Amsterdam to their heartbreaking reunion in a concentration camp. The two met at school and were together all day long, talking about boys, playing hopscotch talking about boys, playing hopscotch and organizing a ping-pong club called The Little Dipper.

3. The Attic: The Hiding of Anne Frank

The Attic: The Hiding of Anne Frank is a 1988 classic wartime drama film. It is based on the book Anne Frank Remembered, by Miep Gies, published the same year as the film.

According to IMBd, Miep Gies struggles to keep Anne Frank and her family hidden and safe inside the secret annex, as the Nazis turn Amsterdam upside-down.

“You’ve been sleeping with my husband since your son was…