Nigerian-American professional basketball coach, Ime Udoka, is reportedly set to face a disciplinary action for having an intimate and consensual relationship with a female member of the team staff.

The relationship was considered a violation of the organization’s guidelines, and a decision on the length of that suspension is expected to come as soon as Thursday, sources said.

While no final decision has been made, internal discussions have included scenarios that would keep Udoka out for the entirety of the 2022-23 season, sources said.

It isn’t believed that Udoka’s job is in jeopardy, sources said.

Udoka’s top assistant coach, Will Hardy, left the team in June to become coach of the Utah Jazz, and another Jazz finalist, Celtics assistant Joe Mazzulla, would likely be in serious consideration for an interim role, sources told ESPN. 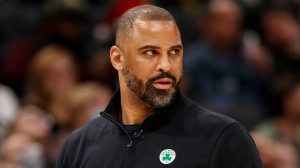 The Boston Celtics head coach violated the franchise’s code of conduct as reported by Shams Charania of The Athletic.

According to Shams Charania, Udoka, who has been in a relationship with Hollywood actress Nia Long since 2010, could face punishment or possible suspension from the team for his alleged transgressions.

Udoka and Long have a son, born in 2011. The couple became engaged in 2015, although Long has stated she has no plans to marry.

ESPN reports that the Celtics are expected to decide on the length of that suspension as soon as Thursday, but it isn’t believed that Udoka’s job is in jeopardy.