The death in custody in Iran of a Kurdish woman that led to widespread protests must be “steadfastly” investigated, Iran’s president has said, as he lamented what he claimed were western “double standards” on human rights.

Ebrahim Raisi told a news conference on the sidelines of the UN general assembly in New York that the death of Mahsa Amini while in the custody of Iran’s morality police “must certainly be investigated”.

“I contacted her family at the very first opportunity and I assured them we would continue steadfastly to investigate that incident … Our utmost preoccupation is the safeguarding of the rights of every citizen.”

Of Amini’s death, he said authorities were doing what they needed to do and that responsibility now lay in the hands of the judiciary. He claimed the initial coroner’s investigations into the death of Amini showed she died from heart failure or a brain stroke, and not a physical beating by the morality police.

But he said: “If her death was due to negligence, it will definitely be investigated, and I promise to follow up on the issue regardless of whether the international forums take a stand or not.” 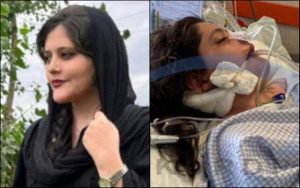 Protesters reject the state’s conclusions, pointing to reports that officers beat Amini’s head with a baton and banged her head against one of their vehicles.

At least 36 people are feared by rights groups to have died in six days of protests, sparked by the death on 16 September of the 22-year-old Kurdish woman.

On Thursday, protesters torched police stations and vehicles in several cities, and Iran shut off the internet in parts of Tehran and Kurdistan, and blocked access to platforms such as Instagram and WhatsApp, in an attempt to curb a growing protest movement. Iranian women have taken to the streets and the internet to burn their headscarves and cut their hair.

Amini was detained for allegedly wearing a hijab headscarf in an “improper” way. Activists said the woman, whose Kurdish first name is Jhina, had suffered a fatal blow to the head, a claim denied by officials, who have announced an investigation. Police continue to maintain she died of natural causes, but her family suspect she was subjected to beating and torture.

The US imposed sanctions on the morality police and leaders of other Iranian security agencies on Thursday, saying they “routinely employ violence to suppress peaceful protesters”. US officials promised to take further measures in the coming days.

Erfan Mortezaei, Amini’s cousin, told the IranWire website that the dead woman’s family were still under pressure to publicly back the regime’s version of events: namely that she did not die because of head injuries sustained in custody, but from complications from a historic brain surgery

”I didn’t have sex with Tega. I kissed and…