First dates can go bad. I met this guy online and agreed to meet up for dinner one night. A few hours later, he texts to tell me he is in the hospital and asks me to come visit him, but won’t explain why he’s there. I agree, thinking maybe he broke his leg or had a car accident on his way to meet me for dinner? When I arrived, I discovered he’s in the hospital because his wife beat him up after she learnt he has been chatting and meeting many girls on social media.

I felt terribly awkward I trying to come up with an excuse to leave when I got there. But he refused to let me go and kept calling me his girlfriend. I left, and afterwards, he continued to text and call me, but I ignored him.

First dates can be intimidating to both parties. It can be filled with awkward moments and uncertainty. When it comes to dating, men and women worry about the wrong things. They wonder whether their dates will laugh at their jokes, whether they will be impressed with their jobs or businesses or whether they will be put off by their hair, beards or weight.

Oftentimes, those attempts to make good impressions backfire. After all, who wants to be around a nervous date? These worse first dates stories will make you scream. Enjoy: 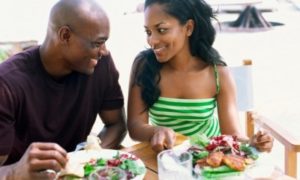 Obiageli: He loves to fart everywhere

I met this guy at a club, he was cute, and we exchanged numbers. He started texting me a lot and asked me out for lunch at a famous eatery at the Island in Lagos. We made pleasant small talk, shared stories about our childhood, sports, favourite TV shows, etc.

Then he adds that he always has to fart–when he’s in the car, at the club, in restaurants, and every time he sits down. I didn’t say anything, so he follows it up, “Actually, I need to fart right now,” and lets one loose in the eatery, which I could hear. I said I had a family dinner and left afterwards. I made sure to delete his number and never called him again.

Obinna: She brought five of her friends to our first date

I went on a movie date with this girl, and she asked if she could bring friends. I figured she meant a double date, so I said yes.

She brought five her friends to our first date. I had to pay for all of them to see the same movie we were seeing. The worst part was that they kept demanding for snacks like hungry wolves. I felt trapped and couldn’t talk much with my date. We didn’t even sit in the same row, and I never got so much as a phone call. When I ran into her later, she said that the reason she didn’t call me was because I didn’t talk enough. I just shook my head in disbelief.

Bola: I had a date with a man child

I recently met guy online. He seemed normal, respectful, educated, ambitious and neat. We have been chatting for a month before we decided to meet. But on the day we were supposed to meet, he insisted that I should pick him up which I considered odd, but I obliged.

When I got to his house, he told me to wait so he can grab some cash from his mom first. It was like a rock was thrown at my head. He was 36 and still collecting money from his mom to go dates. What a man! That was our first and last date. He kept talking about his mom. I was pissed.

Henry: My date ran into her date the previous week

I went to see a movie with a lady I met on Facebook. Right before the lights dimmed, I noticed she became uncomfortable starring at a guy inside the hall. When I asked, she said he looked familiar. It wasn’t until he was almost at our row that she told me she recognized him as the guy she had been on a date with the previous week.

It was a crowded theatre, and the only seats available to him and his friends were right next to me and my date. She panicked and told me we needed to leave immediately. We managed to get out of the theatre without eye contact, but there’s no way we met again after that first meeting.

Some people think that if they don’t support you, you…