Wives are having a hard time catching their husbands pants down with their maids these days.

Some of these maids are underage. Some have signature body odour while others have unkempt hair and look anything but attractive to the eyes, yet men go after them with uncontrolled passion. They have sex with them and even get lost in their fields after harvesting their wetlands. They are house helps.

These girls who sometimes come into a family to be assisted by the couples even as they help out with house chores eventually start eating madam’s food. They eat so much of the dangling rod that some of them get confused by the sweetness down there. They become rude and stubborn to madam.

Will you blame them? They now see what madam has been seeing for years. They now know what Oga’s rod looks like before and after action. They know if it is big, medium or small. They also know if it is straight, curved, long or short. 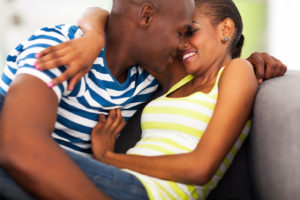 No matter how old they are, once that boundary has been crossed by the man of the house, the door is opened for his wife to be disrespected. Since these girls are now eating from the same source as the woman of the house, they lose respect for her. The respect they once had gradually vanishes with the hump and thump they get from keeping oga’s rod wet and busy.

These house girls are supposed to do the house chores at home. They are to cook food, clean the house, wash clothes and take care of the children. But the roving eyes and wandering penis of the men in the houses where they work won’t just let them focus on the job they are meant to be doing.

These men sneak into their rooms at night or rush back home during the day when they know their wives are away at work just to sweat on top of their house girls. Some of them even stoop so low as to tell these girls to call them by their first names, abomination.

The skills which these men display while riding these girls have not been experienced by their wives in many years. Yet, they devote time, energy and resources on little girls old enough to be their daughters just because they can’t control their insane urges.

These girls know the style oga loves the most in bed. They give what he wants and quickly too. They know when to walk about naked in the house for him to squeeze their breasts and pat their backside. They know all the colours of his boxers and play with his moustache as well as the hairs on his chest while madam is busy answering our wife for nothing.

What I find disturbing is how these men do all these things and still claim head of the house. Some of them even blame their wives for their wandering penis when they are caught pants down with their house helps. It’s a shame that these men lack respect for their wives and marital vows.

It happened yesterday, it’s happening now as you are reading this and it will happen tomorrow. It’s no more news that no matter how gentle and responsible some men look, no matter the respect they get at home and the fear they create at work, they still sneak around with house girls.

Such men even shiver at the feet of these house helps, the young lady from the village who once looked tattered, unkempt and can never be a match to his wife. Some wives who are not so unlucky have been replaced by house girls because the man was thinking with his tool and not his brain.

No one would say they have not heard of any story where the man of the house has been sneaking into the room of the house help just to peruse their oil rigs and sweat, pant and release. These men even grab these girls in the sitting room where they perch to catch some good night rest.

Some of these stories are heartbreaking as they are annoying. You hear of stories where a man leaves his designer wife to go after an unkempt house help who stinks and looks nothing close to being beautiful and you ask yourself what these men are actually looking for.

Is there anything special about the joy holes of house helps that attract these men? What do they have that madam is lacking? Why do men go though the stress of sneaking up and down at night just to insert and remove their tools from the wet place of house helps when madam is at their disposal?

Why do men stoop so low to have sex with house helps who are sometimes minors? Are house girls now better than wives or what in that department? Is there no way men can stop this dirty habit of eating elsewhere even when the other party is nothing compared to their wives? Is it true that konji is no respecter of persons?

Women needs answers to these questions and only men who love to jump in and out of house helps can honestly answer these questions. Some of the women who have caught their husbands doing press-ups on their maids cover up their deeds out of shame. Some of them feel it’s insulting for their men to be stealing waters from girls who cannot even look them in the face. They keep changing house girls while their men continue tasting these girls like people in a wine tasting event.

Good husbands are hard to find these days

Guys need to learn the art of wooing women

Only wicked people send abused women back to their abusers