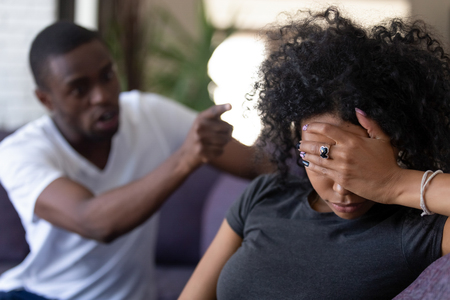 Many times, you hear women making excuses for men treating them badly and you wonder why they do so. You see being beaten, humiliated, stripped, disgraced and abused by the men in their lives and they still tell it is not the fault of these men.

They come up with a million excuses why these men act the way they do. They blame external factors for the abusive actions of these men towards them. Sometimes, these women blame themselves for provoking these men and you start to wonder why they hate themselves so much.

The same women who won’t mind giving abusive and toxic men 100 chances to continue treating them poorly won’t do the same thing when women offend them. They will tell you that women are their own worst enemies while the men doing them dirty love them. Such funny creatures!

Are you guilty of making excuses for the guy you are dating? Do you cover up his bad behavior with tales of how bad he had it growing up? Do you blame other people for the bad things he does to you? Do you think he is even worth those lies and justifications? If you are justifying too much of his bad behavior and selling yourself short in the process, it’s time to stop.

Below are top signs that you are making excuses for a man treating you badly:

*He is going through a rough time

This is not an excuse for the man you are dating to be rude to you, your family members and your friends. Instead of accepting that he behaved poorly and let him face the music for that, you would rather try to explain his bad behavior away. Why? Is it so that you don’t have to face up to who he really is underneath his nice guy act when you are alone? When a man makes excuses, avoid him.

*He loves me in his own way

Nigerian women need to differentiate between love and abusive behavior. I am appalled when I hear women defend men who don’t give a hoot about them. He insulted you in public, doesn’t respect you and your opinion one bit but you know he loves you, right? He can never talk about the future but he says he’s crazy about you. Sorry, but even if he’s said those three words, the point is that you shouldn’t believe them unless he’s actually behaving like he loves you. He doesn’t if he’s treating you like crap or wasting your time.

*He had a tough upbringing

This is clearly not a valid excuse for him being nasty to you and disrespecting you. Many people had it tough growing up in different parts of the world but not all of them go about hurting other people with their words and actions.

That toxic guy you are dating is always quick to blame his rough childhood for why he’s abusive, trash talking you, humiliating you and take responsibility for himself and you sheepishly agree with him because love is blind and he claims to love you. That’s not love. He has to be man enough to be responsible and create his own life. If he’s always stuck in the past, he’s not doing that and you don’t have to pay the price for a man who refuses to grow up.

*We are officially a couple yet

What does that mean? He can flirt with other women? He can lead you on? He can give you some of himself but only on weeknights? Just because you are not official or exclusive, it doesn’t give him the right to treat you badly. Whatever happened to basic decency and respect? What happened to staying on his own until he is ready for a relationship?

*He wouldn’t do it if I didn’t provoke him

Instead of seeing him for the toxic guy he is, you blame yourself for why he’s angry or giving you the silent treatment. If you are always thinking you are to blame for what are clearly his personal and twisted issues, you are wasting your time with him instead of backing yourself up. He’s trying to project his problems on to you. Stop allowing an abusive man blame you for being abusive to you. It is his fault not yours.

*His ex cheated on him and he’s hurting

This is another classic excuse for why a guy has trust issues and projects his insecurities on you. You don’t have to be punished for a nasty ex who treated him so badly and it scarred him for life. Maybe that did really happen to him and it is heartbreaking, but it’s no reason for him to expect you to treat him badly. If he’s using his trust issues as an excuse why he can’t commit or treat you like you deserve since you love and respect him, then he’s really telling you he’s not that into you. Don’t make excuses for his behavior, you are hurting yourself.

*He is reserved and mysterious

He doesn’t really talk to your loved ones. He’s aloof and can be a bit standoffish at times. In private, he never talks about his feelings, doesn’t express himself, doesn’t communicate with you and instead of realizing that he’s holding back from you, you tell people he’s mysterious. This is one of the excuses guys make to not be in a relationship. Many Nigerian guys are crafty and deceptive, don’t trust what they say if their actions don’t match their words.

*A loved one or colleague treats him badly

It doesn’t matter if his mother, father, friend or boss is nasty to him, you are not them and you shouldn’t pay for that. If it seems like your boyfriend is always blaming the bad things in his life on others around him and you are using those people as excuses for why he’s so horrible, he’s got you right where he wants you. You are indirectly devouring yet another slice of his “poor me” cake. You don’t have to entertain a guy who is a man-child.

*He is so busy

He’s so busy with work and that’s why he never communicates with you or gets back to you when you send him messages. You keep telling yourself that he would have called back if he got the time. You keep saying he would have gone to dinner with you on your birthday, but then something urgent came up again, but he felt really, really bad. When a man makes excuses to talk to you, you should know that you are not his priority.

You claim the guy is so busy and he can’t really be in a serious relationship right now, so what are you doing with him, playing house? No matter how busy a man is, if he loves and cares for you he won’t stay without communicating with you. He would make an effort if you were a priority in his life. A man who doesn’t care about how you are faring, what is happening in your life and how you are dealing with life’s challenges shouldn’t be in your life. He is stressing you out, stop making excuses for him.

*He wants to change

He wants to change but it’s not easy is not what you should saying about a man who doesn’t treat you right.  If he hasn’t been making an effort to be a better man before you even came along, then why should your presence in his life make a difference? Yes, you are an amazing person, but he needs to fix his own issues.

If he promises he will change for you, alarm bells should ring because you can count on him going back to his bad behavior. Think of that before you start giving him your all in the hopes that he will change so you don’t end heartbroken and disappointed. If your husband makes excuses for everything, he is not a good husband.

You go into a relationship to enjoy companionship with your partner not to become a dumping ground for insecurities, bad behavior and abuses. Nigerian women need to stop allowing men walk all over them because they want to prove that they are good women.

You shouldn’t be good to a man who is always bad and abusive to you. You are damaging your self esteem and wasting valuable time you can convert to a money making venture. Think about it and do right by yourself. Stop making excuses for toxic men, you will lose yourself in the process.

When you say my boyfriend makes excuses for everything, just know that you are dating yourself. A person who is full of excuses is not someone you should date or marry. When a guy makes excuses not to date you, have some respect and move on with your life. You don’t have to beg a man to be in your life.