The guessing game determining the status of Jennifer Lopez and Alex Rodriguez’s relationship continues as she is spotted without her engagement ring.

Nearly a month after reports of a rumored split between the longtime couple first surfaced (and their day later reunion), Jennifer Lopez is fueling speculation once again about whether or not they are still together.

On Saturday, the actress posted a slideshow of images to her Instagram feed from the location of her upcoming movie, Shotgun Wedding.

In the photos, Lopez is dressed casually in a white crop top and cream cream-colored joggers. 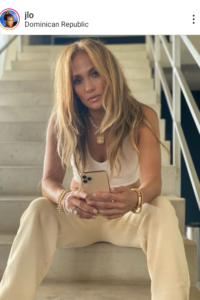 She accessorized the low-key look with a stack of gold bracelets, a pendant necklace, and a diamond ring on her right hand — however, noticeably missing from the mix was her emerald-cut engagement ring.

“Keep calm and work on the weekend,” J.Lo captioned the series of photos, in which she’s pictured posing on a staircase while on her phone.

Last month, it was reported that Jennifer Lopez and Alex Rodriguez called it quits on their four-year relationship, but in less than 24 hours, the couple put the rumors to rest and revealed that they were still together.

“All reports are inaccurate,” the pair said in a joint statement. We are working through some things.” Days later, the two reunited and packed on the PDA in the Dominican Republic, where Jennifer Lopez is filming her new movie. 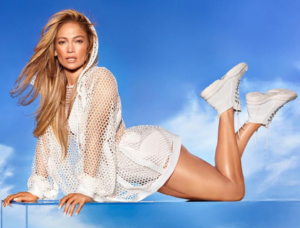 “Alex remains committed to working on things with Jennifer,” a source previously told E! News. “It was important to Jennifer that Alex stepped up in a public way and showed his level of commitment to her with a trip to see her while working. Jennifer appreciates big gestures like these.”

The insider added that their relationship (at the time, at least) was “heading in the right direction.”

In 1991, Lopez began appearing as a Fly Girl dancer on In Living Color, where she remained a regular until she decided to pursue an acting career in 1993.

According to Celebrity Net Worth, JLo’s net worth is a whopping $400 million. Her wealth comes from a combination of her dancing, singing and acting careers.

Men who kiss and tell are not sensible