Justice Lisa Ramsumair-Hinds, a judge in Trinidad and Tobago, is a champion for gender-sensitive adjudication, raising awareness and sharing her knowledge around the world.

Since 2015, Justice Ramsumair-Hinds has been actively involved in a UN Women/CAJO collaboration under the Caribbean Court of Justice Judicial Reform and Institutional Strengthening (JURIST) project, funded by the Government of Canada.

“One major accomplishment was the development of a draft ‘Gender Protocol for Judicial Officers’ which was handed over to regional chief justices,” says Justice Ramsumair-Hinds.

The protocol provides guided questions for judicial officers to help them recognize and eliminate gender biases and to strive for gender equality in the adjudication process.

“Since then, three out of four regional judiciaries have launched their individualized Gender Protocols.”

Last month, Justice Ramsumair-Hinds began training judicial officers in Nigeria in gender-sensitive adjudication and support the development of their own gender protocol, another connection made by UN Women.

“I am proud that this little Indian girl from a broken home, who grew up without indoor plumbing for years, and had no money to commute to school, made it this far and at a younger age than most,” says Justice Ramsumair-Hinds.

“When I apply an understanding of intersectionality to my story, I know that I have been fortunate. My hope is that more little girls with humble beginnings can fulfill their potential.” 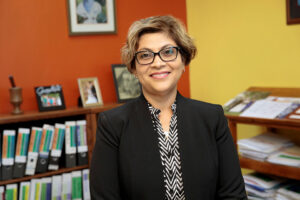 Justice Ramsumair-Hinds wanted to be lawyer since she was in primary school. She began her career as a prosecutor in Jamaica, where she says, “so much was done with precious little in the way of resources.”

She returned to her home country, Trinidad and Tobago, and continued to practise law.

In 2006, when her husband saw an advertisement for magistrates, he encouraged her to apply, saying, “change the system from within.”

Justice Ramsumair-Hinds was sworn in as a magistrate in 2007 and after a decade in the summary courts, became a judge in 2017.

She remains inspired to change the system from within and says: “Women and girls have out-performed their male counterparts at every level of education in Trinidad and Tobago.”

“At present, 66 per cent of our magistrates and 77 per cent of our High Court judges are women. Yet, for all the gains in academic circles and judicial appointments, society still labours under toxic manifestations of patriarchy.”

“Until we demand a genuine end to gender-based violence, we will keep advising girls to avoid ‘allowing’ themselves to become victims of rape, instead of making their attackers accountable,” says Justice Ramsumair-Hinds.

15 things you should know about women in Trinidad and Tobago

Evil thrives in Nigeria because there’s no true…