15 things you should know about women in Trinidad and Tobago

Depending from which island the women came, they may also be called Trinidadian or Tobagonian women respectively.

According to the 2012 National Gender Policy, despite high levels of education and employment, women in Trinidad and Tobago are still the primary caregivers in the society.

They have the majority of the responsibility for raising children, performing housework, taking care of the sick, the aging and elderly, and the disabled, and managing many of community based organizations.

Many public spaces display African imagery, primarily from Nigeria and Ghana because these nations are still Trinidad and Tobago’s closest political allies and cultural beacons. These social spaces provide an outlet in the face of a country struggling with increasing crime rates against women.

Below are 15 things you should know about women in Trinidad and Tobago:

1. Women in Trinidad and Tobago excel in various industries and occupations, including micro-enterprise owners. They are lawyers, judges, politicians, civil servants, journalists, and calypsonians. Women also dominate the fields of domestic service, sales, and some light manufacturing. 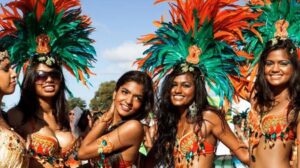 2. In Trinidad and Tobago, women and girls experience domestic violence, incest, rape and other forms of sexual violence and abuse to a degree that is staggering and almost common-place. Domestic violence-related homicide are second only to gang murders as the leading non-medical-related cause of death for women.

3. Gender roles in Trinidad and Tobago are influenced primarily by legacies of patriarchy and colonialism. Historical views of race and colonialism impact Trinidadian culture in such a way that are often excluded from Western feminist studies.

4. By participating in Trinidad and Tobago’s version of the Carnival, Trinidadian and Tobagonian women demonstrate their assertive sexuality. Some of them have also been active in so-called Afro-Christian sects and in running the “sou-sou” informal rotating credit associations.

5. Contraception is legal in Trinidad and Tobago, and varying contraception methods for both men and women are widely available throughout the country either through the government-run clinics under the Ministry of Health, organisations such as the Family Planning Association of Trinidad and Tobago and private medical practitioners.

6. On average, from primary to tertiary levels of schooling, girls outperform or have higher enrollment levels than boys in Trinidad and Tobago. This pattern has been observed for the past couple decades. There is a high enrollment rate of females in tertiary learning institutions. About 65 per cent of total students enrolled at University of the West Indies St. Augustine campus in 2009/2010 were female.

7. Women generally enjoy the same legal rights as men, including employment, education, and inheritance rights. No laws or regulations require equal pay for equal work. While equal pay for men and women in public service was the rule rather than the exception, both the government and NGOs noted considerable disparities in pay between men and women in the private sector, particularly in agriculture. 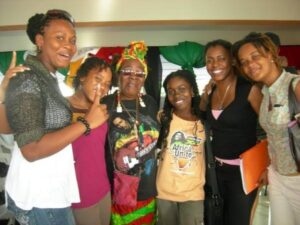 8. As of 2016, 60% of Trinidadian women participate in the labour to force, compared to 81% participation from the male population. Historically, female labour force participation rates in Trinidad and Tobago are lower than male participation rates. Over the past two decades (1990-2010), this disparity between these rates has been decreasing.

9. In 2016, Trinidad and Tobago ranked 91st in the world (out of 114 countries) in wage equality between men and women for similar work. Research shows that there are substantial wage differences between men and women in Trinidad and Tobago. While women account for the largest entry into both the workforce and education, a 2015 study shows that their wages are still less than men.

10. The Constitution of Trinidad and Tobago prohibits all forms of discrimination on the grounds of gender. The Trinidad and Tobago Succession Act was passed by Parliament in 1981 and Legislation on Property Rights was also passed, revising provisions on real property and women’s property rights. As such, the Government of Trinidad and Tobago affirms women’s rights to property ownership. Although there exists no legal restrictions to women’s access to land tenure, Trinidad and Tobago still has a gender disparity of distribution of land ownership, with some studies indicating that only 14% of private land owners are female. It is suggested that this is predominantly male dominated due to the customary regimes like patriarchal inheritance practices.

11. Under the Offences Against the Person Act, abortion in Trinidad and Tobago is illegal except in case of threat to the life or health of the pregnant woman. The punishment for a woman who has an abortion is four years in prison and the punishment for a doctor or other person who performs the procedure is the same. Aiding in the process of finding someone to perform an abortion or other preliminary steps is also illegal and subject to a two-year prison sentence. 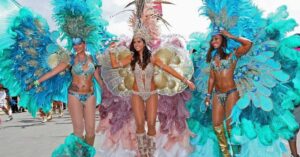 12. Rape, including spousal rape, is illegal and punishable by up to life imprisonment, but the courts often hand down considerably shorter sentences. The government and nongovernmental organizations (NGOs) report that many incidents of rape and other sexual crimes were unreported, partly due to perceived insensitivity on the part of the police.

13. Many community leaders assert that abuse of women, particularly in the form of domestic violence, continues to be a significant problem. The law provides for protection orders separating perpetrators of domestic violence, including abusive spouses, from their victims, as well as for penalties that include fines and imprisonment. While reliable national statistics were not available, women’s groups estimated that from 20 to 25 percent of all women suffered abuse.

14. Near the end of November 2016, the hashtag “#LifeInLeggings” began circulating on Caribbean social media. Within the thread were countless tales of the sexual harassment and sexual and domestic violence that women in the Caribbean experience on a daily basis; from casual everyday street harassment, workplace sexual harassment, to explicit accounts of sexual abuse of girls, victim shaming and protection of male abusers through a conspiracy of silence.

15. Muslim women in Trinidad and Tobago perform gender roles in order to express self empowerment. Many of these women do not identify as feminists due to the conflicting nature of Western feminism in relation to the historic patriarchal influence of Islam.

According to Peace Women, Trinidad and Tobago is fully committed to the achievement of the goal of gender equality and the empowerment of women. In that context. There is need to strengthen efforts to ensure that women are equally represented in all spheres, including at all levels of decision-making processes in the field of peace and security, given the important and valuable contributions that women have made and can continue to make to achieve conflict resolution and peace building initiatives.

Ladies, no man has the right to demand you give up your…

5 symptoms of cervical cancer every woman must know