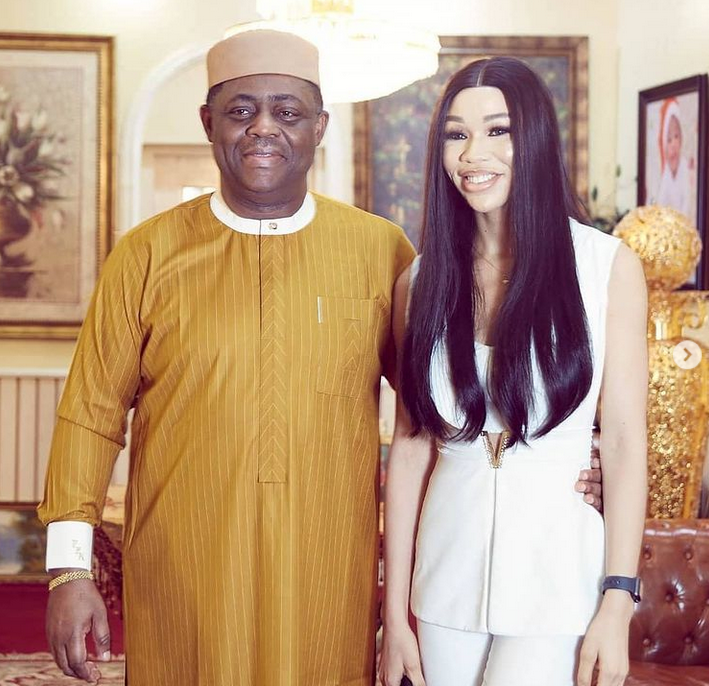 Former aviation minister, Femi Fani-Kayode has found love again. This time, the lawyer and politician is head over heels in love with a beauty queen, Miss Ezenwa Chika Nerita who was crowned as Queen of Aso International 2019/2020.

This comes a few months after he parted ways with the mother of his four sons, Precious Chikwendu.

His new boo, Nerita was present two days ago at the birthday celebration of his triplets in Abuja and was seen visibly coordinating and entertaining guests.

David Oluwafemi Adewunmi Abdulateef Fani-Kayode was born on October 16, 1960. He is a Nigerian politician, essayist, poet and lawyer.

He was a member of People’s Democratic Party (PDP). He was with the opposition’s All Progressive Congress (APC) until June 2014 when he returned to PDP.

Although his family lineage originates from Osun State, he was born in Lagos on 16 October 1960 to Chief Victor Babaremilekun Fani-Kayode and to Chief (Mrs) Adia Adunni Fani-Kayode.

Femi Fani-Kayode is an Ile-Ife chieftain of Yoruba descent.

Femi Fani-Kayode has been married four times. His first marriage was to Saratu “Baby” Atta in 1987 and they were divorced by 1990. They have one daughter whose name is Oluwafolake.

His second marriage was to Yemisi Olasunbo Adeniji in 1991 but they were divorced by 1995. They have three daughters whose names are Oluwatemitope, Oluwatobiloba and Oluwatuminu.

His third marriage was to Regina-Hanson Amonoo. They were married in 1997 and have one daughter, whose name is Oluwaremilekun.

In 2014, Femi Fani-Kayode and Precious Chikwendu, a beauty queen and the winner of the Miss United Nations (world) beauty pageant 2014, got married. This was his fourth marriage.

On February 1st 2016, Fani-Kayode and his wife, welcomed a baby-boy, their first child. He was christened Joshua Oluwafemi Emmanuel Lotanna Aragorn Fani-Kayode. He is Fani-Kayode’s first son. On 25 May 2018 Precious Chikwendu Fani-Kayode gave birth to three boys.

He separated from Precious Chikwendu and they fought messy on social media with allegations and counter allegations flying left, right and center.

Now, he has found love again.