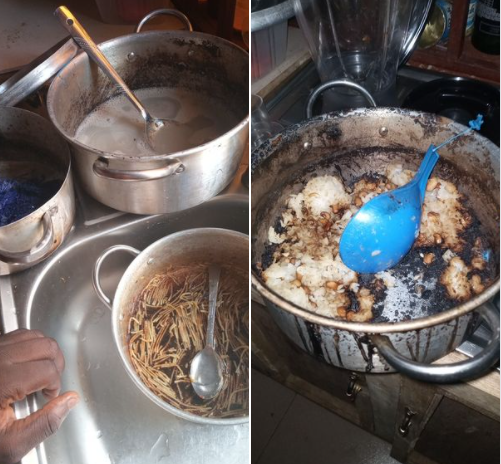 A journalist has announced he’s searching for a wife after failing at preparing meals. He revealed on Facebook that he burnt three pots of food in two days.

He shared photos of the burnt pots and asked women interested in getting married to reach out to him.

“I am tired of getting this kind of result when I cook. If you are available for marriage send emoji. Three pots got burnt in 2days.” he wrote.

“How can a full grown-up man be this irresponsible. There is nothing my man cannot cook. Cook is a surviving skill and not a reason for you to get married.
Who will even marry you like this? Please mothers, teach your children how to cook irrespective of the gender. You should go an employ a cook not looking for a wife.”

“Is cooking a gender base thing now? There are guys who know how to cook than many ladies. So calm down and learn how to cook and also be mindful with what you’re cooking and put your journalism phone aside while in the kitchen. No go marry any girl in a hurry because of her cooking skills and regret later.”

“Mr. Man you don’t need a wife, what you need is a cook, or a paid chef. Don’t marry someones daughter because you solely need someone to cook for you. Marriage is a whole lot more than that.”

“If you can’t take care of urself, put the blame on your parents, don’t put pressure on another man’s daughter.”

By their post and comment, we shall know them. Badly raised men here and there, looking for naive women to frustrate and clean their mess.

Don’t worry, one daughter of Eve who is so desperate to bear the title of Mrs will gladly fall for you. Just imagine the silly reason why he wants to marry. Nonsense!”

“You need a cook, not a wife. If you can’t afford to hire a cook, learn how to cook for yourself. Cooking is a basic life skill and not perculiar to a particular gender. Food/cooking is not enough reason to get married. If you lack cooking skills, hire a cook not a wife.”

You are not ready for marriage, remain single. A full grown man like you do not know how to cook. Shame on you.
Where is your mom? If it where to be a woman who posted this they must have dragged her through the seven seas. My friend you don’t need a wife, go and employ a chef/cook. You need to learn, don’t go and kill someone’s daughter because you want her to always prepare your meals.”

“Dear ladies, don’t marry this kind of man, he won’t see you as a wife but a cook.. He’s not looking for love , but anyone available that can cook and that’s a risk on your side.”

“I don mark this guy face…. Iffa see you with my sister you’re dead🤨 in fact any woman close to me iffa see you in a relation-whatever with them you’re still dead. You lack training, you lack the characteristics of a good man. Me way nor sabi cook at least I don dey try, I can cook Indomie now, boil water, make eba and do some small salty soup….you dey there dey burn food. Nonsense boy🙄😏. Nor lemme catch you with my sister oooo😡

“Seriously, cooking isn’t for women only. We should stop this obsolete attitude. Any nigga wey no sabi cook gats to go learn how to cook asap. In a nutshell, he is now looking for a wifey wey go come cook for him abi?”