Yinka Alaseyori, the gospel singer whose song was criticized by Tope Alabi,  has finally reacted days after.

However, popular gospel singer, Tope Alabi objected to this, claiming that the Holy Spirit does not approve of such name.

While ministering at a vigil in the early hours of Saturday,  June 12, Tope Alabi said that when she tried to sing the song, the Holy Spirit told her not to. She added that God is not a guarantor.

Responding, Yinka said Tope Alabi is a mother to her and others. She then asked people to centre God in their worship.

She added: “Mummy Tope Alabi is our mother. She is a mother to me and so many and by virtue, we have been blessed by her ministry. 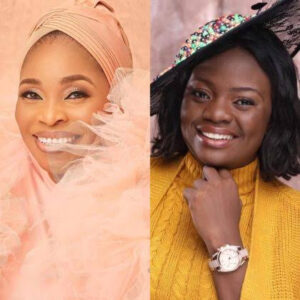 “Please and please, let us worship God, let us celebrate God, let Jesus be at the centre of it all.”

Ms Alabi made the remarks in a viral video when she was invited to minister at an event over the weekend. She said the song, which means ‘My Guarantor’, does not explain God’s powers fully.

She also inferred that her colleague didn’t think deeply about the lyrics of the song fully before recording the track.

She said, “God is beyond being a guarantor to Man. I’m not saying that the song is not beautiful. However, when we receive heavenly inspiration to sing, there are some deliberations we must have with the Holy Spirit before we can bring out such a song.

”If we keep singing the gospel just as the Spirit-inspired, there is the possibility that we all will be singing absurdly. As gospel singers, God has given us the brain to digest, chew, and fully comprehend the inspiration given to us before we bring it to life.”

Bella Hadid admits she got a nose job, opens up about…

Married woman confesses that her two kids belong to her…