Rufftown Records signed artiste, Wendy Addo, well known as Wendy Shay, has alleged that some Nigerian upcoming artists have been sleeping with some female Ghanian celebrities.

In an interview on Accra-based radio station Peace FM, Wendy Shay disclosed that she is aware of the female celebrities who are having an affair with these Nigerian underground artists.

According to her, some underground artists in Ghana are not given the opportunity to penetrate into the Nigerian market with their music talk less of dating their top stars.

She urged female celebrities to desist from such acts because it’s a form of disrespect and could also be the reason why Ghanaian music isn’t doing well.

“Our top stars not only musicians… all you see are an underground artiste from Nigerian who comes and is dating a top female star in Ghana. I can’t mention names but it’s the female celebrities I’ve seen do that. It’s heartbreaking. 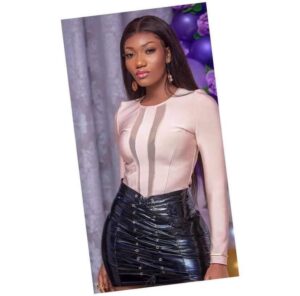 I can’t mention names because if I do that, it will be like I’ve personalized the issue but it’s an observation I’ve made for some time now. Even the country as a whole, you’ll realize that we support outsiders than we support our own,” she said.

She added that in Nigeria, big celebrities will not open their arms for you neither will they allow Ghanaian stars to date a big star in Nigeria so Ghanaians should replicate it.

Wendy Asiamah Addo, known by the stage name Wendy Shay, is a Ghanaian Afropop and Afrobeats singer. In March 2021, she was among the Top 30 Most Influential Women in Music by the 3Music Awards Women’s Brunch.

Wendy Shay is a trained Nurse by profession, worked as a Midwife in the clinical field. She was practicing midwifery until she relocated to Ghana to pursue her music career.

She was introduced to music by Rufftown Records Manager Bullet and signed in January 2018 after the untimely death of label mate Ebony Reigns.

On June 1st 2018, Wendy Shay released her debut single “Uber Driver”, produced by MOG Beatz. The song was released together with the official video the same day.

10 things you should know about talented actress Regina Hall