The 18-year-old superstar topped the podium in the halfpipe final at Zhangjiakou’s Genting Snow Park, adding to her gold in the big air event last week and silver in slopestyle on Tuesday. Gu, who says halfpipe is her strongest event, dominated from the start.
Again and again, she sped up the wall of the halfpipe and launched herself skyward, spinning and twisting gracefully to loud cheers from fans in the stands. 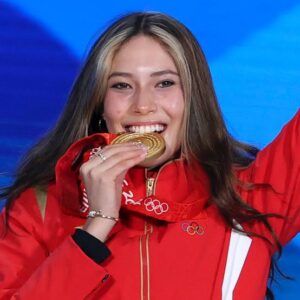 Already firmly in the lead, she outdid herself in the second run with an impressive score of 95.25. She was already assured of the gold by the time she set off on a third run victory lap.
Gu gave her coach a big hug at the top of the slope, came down the halfpipe once again and finished the ride with easy jumps, posing and celebrating her victory in midair.
“I’ve never taken a victory lap before in my entire life, so I felt like, ‘You know what, last event at the Olympics it feels like I finally deserve it’. I’m really happy,” Gu told reporters after her win, according to the Olympic site.
Advertisements 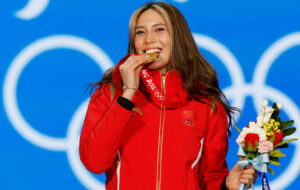 “It has been two straight weeks of the most intense highs and lows I’ve ever experienced in my life. It has changed my life forever,” she said.

Reflecting on her first and history-making Olympic Games, Gu said her overriding emotion was a “deep-seated sense of gratitude and resolution.”

“Just like this all coming together, years and years in the making and it’s like letting out a deep breath. I feel exhausted. I mean, God, from opening ceremony until now I’ve been skiing every single day so I’m really tired, but I feel at peace. I feel grateful. I feel passionate, and I feel proud,” she said.

Don’t marry a man who is threatened by your success

Do you know a woman can get pregnant while already pregnant?

Lady says there’s nothing wrong with hitting a woman

Na belle I carry, I no kill person TBoss says as she…