Shay Johnson Reveals Her Fibroids Returned During Her Pregnancy

Shay Johnson recently got some scary news. In a recent Instagram post, the Love & Hip Hop Miami star revealed that her fibroid tumors have returned during her pregnancy.

Even though she has had a myomectomy to have them removed, that didn’t stop them from growing again.

In a video with her two brothers, Joe and Emjay Johnson, beside her, she said that three fibroids were found during her recent ultrasound. 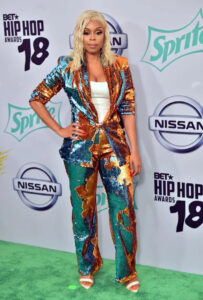 “The only thing I can do right now is monitor the fibroids because it’s next to the baby,” she said. “Thank God it’s in the position that it is in.”

The fibroids could come out after she gives birth or grow bigger, and right now Johnson is unsure about what will happen.

“I was advised by my doctor because I’m pregnant there’s nothing I can do right now but monitor the fibroids,” she captioned the video.

“Any procedure to remove the fibroids, which my choice would be UFE, can possibly harm the baby and of course I’m not taking that chance…I was also advised they might go away on their own once I have the baby. The only thing I can do now is wait. THIS SUCKS😖I will keep you guys posted on this process.”

UFE, or uterine fibroid embolization, is a procedure done by a radiologist that will block blood flow to the fibroids and cause them to shrink.

This minimally invasive procedure is usually offered to women who don’t plan on getting pregnant even though there are women who have conceived after having it done, according to Fibroid.com.

Fibroids don’t usually grow while a woman is pregnant but if they do it is because there is more estrogen present during pregnancy, which is the hormone fibroids need to grow, WebMD noted.

Johnson announced on Feb. 20 that she was expecting her first child. She is now trying to pick her name, which she said has been challenging.

Shay is an urban model, reality television personality and fitness guru, originally from Atlanta, Georgia. She is a former video vixen who appeared in hip hop videos for Fabolous and Young Dro, however, she is best known as “Buckeey” on the VH1 reality shows Flavor of Love and Charm School.

Lizzo Shared How Sudden Fame Impacted Her Anxiety and Depression: ‘It Didn’t Go Away’

10 reasons you should navigate difficult times and come out…

Woman claiming to be Ghana President’s side chick…

#BBNaija: Angel is fake, she does everything for clout says…