Despite testifying under oath that she “accepted” that her father, former President Donald Trump, had lost the 2020 presidential election to Joe Biden, Ivanka Trump told a documentary filmmaker one month after the election that her dad should “continue to fight until every legal remedy is exhausted.”

Ivanka’s comments can be seen in footage handed over to the House select committee investigating the Jan. 6, 2021, Capitol attack by British filmmaker Alex Holder, who confirmed this week that he had been subpoenaed by the panel.

The New York Times reports that the president’s eldest daughter made the comments to Holder while he was gathering interviews for a documentary surrounding the final six weeks of Trump’s reelection campaign.

“I think that, as the president has said, every single vote needs to be counted and needs to be heard, and he campaigned for the voiceless,” Ivanka told Holder, according to the Times. 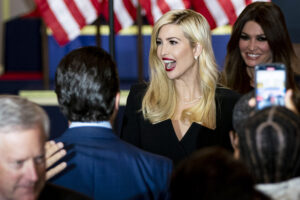 “And I think a lot of Americans feel very, very disenfranchised right now, and really, question the sanctity of our elections, and that’s not right, it’s not acceptable.”

In a statement posted to Twitter, Holder said he had “no agenda” in making his film — which he said is set to be released as part of a three-part series — and that he is cooperating with the committee.

“As a British filmmaker, I had no agenda coming into this. We simply wanted to better understand who the Trumps were and what motivated them to hold onto power so desperately,” Holder wrote. “We have dutifully handed over all the materials the Committee has asked for and we are fully cooperating.”

Holder reportedly has some 11 hours of footage of interviews with members of the Trump family (including Ivanka and her husband, Jared Kushner, as well as Don Jr. and Eric Trump) taken between September 2020, prior to the election, and January 2021, when the administration left office. In his statement, Holder confirmed that his testimony will be taken Thursday.

It’s time to do away with unprofitable friendships

HER BROKEN SOUL 8: Living in a loveless marriage

20 things Nigerian women should know about women in Yemen