Is your partner always accusing you of cheating, stalking you, monitoring your calls, and looking for ways to prove that you are cheating even if you are faithful to him?

This behaviour is not normal. Don’t start making excuses for a man who treats you this way. Staying in a relationship with such a person can lead to physical violence and even death. He’s suffering from a mental disorder.

Othello syndrome is a psychotic disorder characterized by delusion of infidelity or jealousy; it often occurs in the context of medical, psychiatric or neurological disorders.

The name “Othello Syndrome” comes from the character in Shakespeare’s play Othello, who murders his wife as a result of a false belief that she has been unfaithful.

The Othello syndrome affects males and, less often, females. It is characterized by recurrent accusations of infidelity, searches for evidence, repeated interrogation of the partner, tests of their partner’s fidelity, and sometime stalking.

Like Othello, there are people who fall into these vicious and obsessive cycles of suspicion and mistrust towards their partners. There is no factual basis or motivation for it, other than their own imagination. People like this tend to suffer from Othello Syndrome. 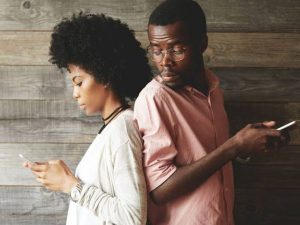 Below are 10 things women should know about this mental disorder:

1. There is no known cause for such a disorder. However, a possible explanation for it could be childhood trauma, where the person with the disorder has had an unstable relationship with their care givers as a child, or they had familial issues where one parent was unfaithful to the other.

2. A person suffering from Othello Syndrome behaves in a completely irrational way. In other words, the individual sees what they want to see, without considering if there is or isn’t proof of their beliefs. Their biggest concern in the relationship is to meticulously search for evidence that gives their partner away. They will look through their partner’s cell phone and computer and constantly question them about their routine. Their delusion might even lead them to believe that their partner has changed their habits since they became unfaithful.

3. Symptoms of Delusional Disorder include:

Constantly accusing partner of being unfaithful or giving other people too much attention.

Finding “proof” that their partner is unfaithful even though there is no such evidence.

Finding fault with their partner.

4. Othello Syndrome can be a very distressing disorder for the person suffering from it and also their partner as well. It greatly impacts the couple’s quality of life and causes high tensions in the relationship, which is unhealthy for the long term.

5. A low-dose antipsychotic agent is the first line of pharmacological treatment, especially when a level of psychosis has been assessed. Pimozide 2 mg daily for several weeks is specifically indicated for monosymptomatic delusional states such as paranoid jealousy ideations and obsessive-compulsive disorder.

6. Treatment for pathological jealousy is possible with professional help.With assistance, the individual can learn to control their jealousy and recover their personal serenity. In addition, they can even restore harmony to their relationship.

7. A diagnosis of delusional disorder-jealous type requires that “an individual experiences persistent, unrelenting content-specific delusions of a partner’s infidelity that cannot be explained by a conjoint history of schizophrenia, drugs, or physical illness. These are the signs of delusional jealousy.

8. Othello Syndrome is a condition that can have serious consequences due to the uncontrollable and irrational jealousy that traps sufferers. In some cases, the individual thinks they are the victim of a conspiracy and feels betrayed by their partner.

9. Couples Therapy is a good form of treatment to go through together as the therapist may help to address not just the issue of jealousy but some underlying concerns as well.

10. The most successful and most-utilized therapy for Othello Syndrome is cognitive-behavioral therapy. On one hand, psychologists use behavioral techniques like exposure and response prevention, and on the cognitive side, they use cognitive restructuring. That being said, for extreme cases, experts also recommend anti-psychotic medication for impulse control.

It is important for Nigerian women to learn the art of…

Man Arrested After Threatening Elizabeth Vargas Inside Her…

“I can never be silenced” actress Iyabo Ojo…