During the lockdown, Margaret Stables purchased a silver coffin for her husband while she was drunk. She is now giving it away because “her husband has lived longer than she had hoped”.

The Scottish wife from Easdale posted the ad for the brand new coffin on Facebook Marketplace and left users in shock on Monday, September 26.

The picture that accompanied the Facebook ad showed a gleaming new, silver coffin with a white pillow inside.

The unusual advertisement amused users on Facebook Marketplace, and a number of witty comments quickly appeared on the post. 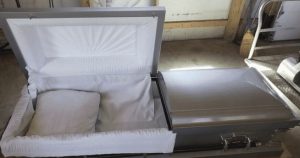 “Giving away a brand new coffin. Bought it for my husband but he has lived longer than I had hoped and expected so no longer required and it’s cluttering up my house. Pillow not included as my dog has taken to it. I am in Easdale but can deliver within reason. Just to add I cannot deliver to Mallaig as I am banned,” Margaret wrote on Facebook Marketplace.

The post was soon inundated with comments, some in innocent jest while some ridiculed the OP. One person joked, “Wish I had thought of this for my first husband. I would have locked the evil git in it while he was alive.” Another said, “Does it fit any husband?”

One user tagged her partner and commented, “Early Christmas present for you babe?” Meanwhile, another asked, “Do you think it’s the right size?”

“I bought one of these last year as a birthday pressie for the mother-in-law. She didn’t use it – so she’s getting buggerall this year!” one hilarious comment read. However, there were some who saw the brighter side. “Nice single bed for someone who just moved into a flat,” a comment read.

Many were left wondering as to whether the listing was genuine or meant as a joke, but Margaret has told the Daily Record, “I bought it in lockdown for a laugh cause we were out at a friends garden party one night. We’d both had a few too many to drink and he was annoying me, so I thought it’d be a laugh to buy this for him.”

An insecure man has no business being in a marriage