Scientists are uncovering new details in the connection between using certain hair straightening products, such as chemical relaxers and pressing products, and an increased risk of cancer in women.

Ongoing research previously suggested that hair straightening chemicals are associated with an increased risk of certain hormone-related cancers, including breast and ovarian cancers, and now, a new study links use of hair straightening products with an increased risk of uterine cancer. Black women may be more affected due to higher use of the products, the researchers noted.

The study, published Monday in the Journal of the National Cancer Institute, estimates that among women who did not use hair-straightening chemical products in the past 12 months, 1.6% developed uterine cancer by age 70, but about 4% of the women who frequently use such hair-straightening products developed uterine cancer by age 70.

That finding “also communicates that uterine cancer is indeed rare. However, the doubling of risk does lead to some concern,” said Chandra Jackson, an author of the study and researcher at the National Institute of Environmental Health Sciences. 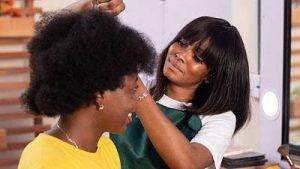 “In this study, women with frequent use in the past year had an over two-fold higher risk of uterine cancer,” she said. Frequent use was defined as more than four times in the previous year.

Cancer risk was most pronounced in Black women

The new study includes data on nearly 34,000 women in the United States, ages 35 to 74, who completed questionnaires about their use of certain hair products, including perms, dyes, relaxers and straighteners. The researchers, from the National Institutes of Health, also tracked the incidence of cancer diagnoses within the study group.

The researchers found a strong association between hair straightening products and uterine cancer cases but the use of other hair products – such as dyes and perms or body waves – was not associated with uterine cancer.

The study data also showed that the association between hair straightening products and uterine cancer cases was most pronounced for Black women, who made up only 7.4% of the study participants, but 59.9% of those who reported ever using straighteners.

Several factors likely play a role in the frequent use of hair straightening products: Eurocentric standards of beauty, social pressures placed on Black and Latina women in workplace settings related to micro aggressions and the threat of discrimination, along with desired versatility in changing hairstyles and self-expression.

“The bottom line is that the exposure burden appears higher among Black women,” Jackson said.

“On top of that, we know that Black women tend to use multiple products simultaneously, which could contribute to Black women on average having higher concentrations of these hormone-disrupting chemicals in their system.”

Lepacious Bose says guys in shrines are better than church…