Award-winning Nollywood actress Ini Edo has scored another hit in her career by making her international debut with the production of the Shanty Town movie for Netflix.

Ini Edo, whose career spans almost two decades of acting is making strong strides in production on the global level as she co-produced the Dramatic Crime Thriller.

Shanty Town is a story that surrounds three unusual prostitutes who unite to take down one of the biggest criminal rings in Lagos state.

In the project, Ini Edo also doubles as a lead character, where she plays the role of Ese equally referred to as ‘The Fire Brand’.

The story isn’t just about a collaboration to fight crime, but it’s that of freedom for all women to become all they want to be and live their positive dreams. This is a great advocacy for women and young girls who have gone through a lot.

It can be recalled that Ini Edo has been an ardent campaigner for women’s inclusion in politics, tech and every worthwhile aspect of human development, as this goes to prove that women are a force to reckon with. 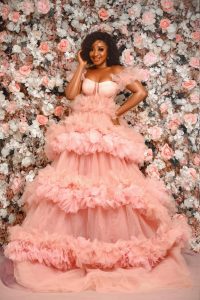 With Shanty Town, she joins the league of top influential Nigerian and African women in the film production circle which include Mo Abudu, Funke Akindele, Bolanle Austin-Peters amongst others.

The video of the scene which shows Isime unclad has been widely shared on social media, sparking conversations among viewers.

However, the actress has come out to debunk claims that the scene depicted her nudes, stating that what was shown was rather a ‘body double’

Nancy Isime played the lead role of the young girl, and her powerful performance has been widely commended by critics.

Dark October: “You’re barking over nothing” Linda Ikeji fires back at Parents of…

Nigerian Comedian, Mr. Patrick Called Out By Angry Wife For…

Nikki Bella on Judging AGT: Extreme with Simon Cowell and…

Ex boyfriends every woman should be thankful for

Shakira’s tax fraud case: What is known about the…