After 11 seasons in the cast of Saturday Night Live, Cecily Strong made her mid-season departure official during the last SNL episode of 2022.

“Tonight we send off one of the best to ever do it,” the show’s Instagram account posted ahead of the live broadcast. “We’ll miss you, Cecily!”

Strong, who was nominated for her work on SNL at both the 2020 and 2021 Emmy Awards, got the chance to bring back her shouting Kimberly Guilfoyle in the cold open. Later, she shone as an elderly super fan of Sarah Sherman’s “Jewish Elvis” alongside host Austin Butler. But “Weekend Update” is where she always burned the brightest, and it was there that she got the epic send-off she deserved. 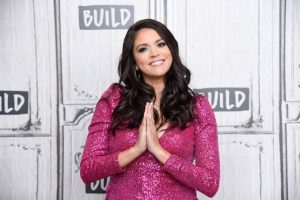 While we may not have gotten one more Jeanine Pirro appearance, Strong did decide to say farewell to SNL with another of her unhinged characters: Cathy Anne, the “woman who’s always yelling outside Michael Che’s window.”

She explained that she was headed to prison, joking that she’s “not too scared because I got friends on the inside and they seem to be doing OK.” With that line, photos of Strong’s recently departed SNL castmates Kate McKinnon and Aidy Bryant in orange jumpsuits appeared on screen next to her.

Towards the end of her final bit, Strong broke character and got legitimately emotional when she said, “Listen, everybody has to go to jail at some point, right? It’s just my time now. But I’ve had a lot of fun here and I feel really lucky that I got to have so many of the best moments of my life in this place with these people that I love so much.”

“Honestly, I don’t think that Radio Shack could have survived this long without Cecily,” he said as Strong fought back more tears. “Every time she came to work, she had a new character or new accent or new impression that would just blow you away. She’d have a power and joy to her performance that made you remember why you loved working at Radio Shack in the first place.”

Davido returns to social media, shares loved up moments with Chioma in Qatar

Some ladies would rather assist a man who promised them…