Jewish activists and community members demanded Whoopi Goldberg face termination from “The View” over the weekend after she doubled down on past Holocaust remarks, prompting a fierce outcry on social media.

Ten months after getting suspended from ABC’s daytime talk show for insisting that the Holocaust was “not about race,” Goldberg, in a new interview with U.K. paper The Sunday Times, showed little remorse for her past rhetoric, arguing again that the estimated 6 million Jews who were systematically killed in the Holocaust were not targeted based on their race.

“The View” co-host also claimed that the Nazis targeted people of African descent in addition to Jews because they were physically different and went as far as to suggest that Jews had an easier time blending in with White people and hiding from the Nazis than Black people did at the time of the Holocaust. 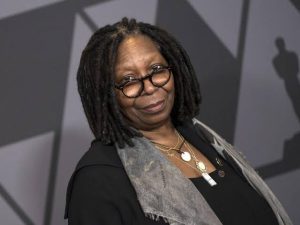 It doesn’t change the fact that you could not tell a Jew on a street. You could find me. You couldn’t find them. That was the point I was making,” she said. “But you would have thought that I’d taken a big old stinky dump on the table, butt naked.”

The Times of Israel called Goldberg’s comments “incendiary” in an article Sunday, pointing out that while her real name is Caryn Elaine Johnson, the talk show co-host has no Jewish ancestry and adopted a more “Jewish-sounding” stage name.

Goldberg’s Holocaust comments in February, which led to her two-week suspension from the network and a subsequent apology, stunned many in the Jewish community. At the time, faith leaders, activists and online critics encouraged her to educate herself on the topic, but largely supported her return to the show.

Now, with the lack of remorse evident in her latest interview, some are calling for her termination over her history of historically ignorant statements.

“So, after supposed ‘apology’ earlier in year, Whoopi Goldberg doubles down on her vile remarks that the Holocaust was not about race, and instead ‘white on white’ violence. Someone get this ignorant fool off the air!,” International Legal Forum CEO Arsen Ostrovsky wrote.

Ladies who fight to keep men are not wise

The lady who refused to be a virtuous woman