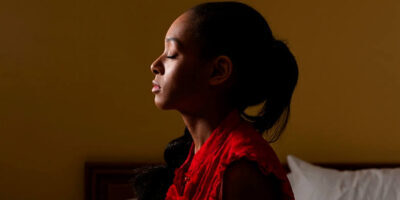 Her boyfriend told her he is bisexual after asking her to marry him. She loves him. He has all the qualities she wants in a man. They have been dating for four years and have a child together. She doesn’t know what to do. Read her story below:

“I’m in a four year relationship and he recently asked for my hand in marriage. First of all, he is an amazing man. He loves me to a fault. We have a 3-year-old child together. At some point in our relationship, it seemed he was foot dragging. Most times, he would be looking at me intensely like he wants to say something, but would tell me to not worry about it when I probe further.

He would ask for a meet up to discuss something important with me, and he ends up not saying whatever it was he invited me over to discuss in the first place. I was worried until I threatened to quit the relationship.

I stopped taking his calls, stopped responding to his messages and rejected his invitations to meet up. He finally told me about his fears. He wants to spend the rest of his life with me but fear has kept him from proposing but he’s ready to let me into his dark side.

He made me swear and even signed like an undertaking that whatever secret he tells me stays between us even if I choose to not continue with the relationship after his confession. I was desperate to hear it, so I agreed.

He is bisexual. Even though he has never cheated on me with any woman since we started dating and would never do that, but he has a male lover.

It took me some minutes to digest what he told me. Nothing about him suggested he was bisexual. We have a healthy sex life. He told me it all started in boarding school while he was in secondary school.

I tried to find out who amongst his friends is his gay partner and he refused to disclose that secret to me. He only told me I’ll be shocked if he tells me.

He proposed and I asked for sometime to get back to him with a response. I’m confused right now, while I’m happy that the man I have loved all these years found me worthy to be his wife, on the other hand I’m sad about his confession. What would you advice i do?”

I get mails like this from young girls quite often and I will always advice them by putting myself in their shoes. I’m not homophobic. I’m one person who feels all humans should be allowed to live their truth. If you are gay, then be gay and not lead a straight person on by living a lie.

While I’m not homophobic, I don’t want to date or be married to a bisexual man. It doesn’t matter how much I love you or how long we may be married, the day I find out you are bisexual is the day it is over between us.

Kudos to your man for telling you the truth, even though it came a little too late but at least it would help you decide what works best for you going forward.

I know couples who are aware their partners swing both ways and don’t mind. While some just for the sake of being married stay put while they wallow in misery.

You heard it first hand that he’s cheating, it doesn’t make any difference because he is cheating with a fellow man. Cheating is cheating!

He has told you he plans on coming into marriage with his partner and all he wants is your approval. If you accept to be his wife, you have also accepted that he is free to do whatever he wishes with his male lover.

You are not confused. No, you are not. You actually know what you want. Remember that nobody has the right to tell you to marry him or not to go ahead with the marriage or end your relationship.

It is best you understand the possibilities of what would likely play out in the future and choose for yourself what works best. If you decide to accept his proposal, and while married you are no longer comfortable, divorce is always an option.

He has opened one of his baggage, it is left for you to decide if you are willing to help him unpack. Choose wisely.