Lands and Physical Planning Cabinet Secretary, Farida Karoney has disclosed how she learnt of her appointment to the Cabinet.

Speaking on Citizen TV, Ms Karoney said she was in Mombasa for a strategy retreat alongside other senior managers at the Royal Media Services, when President Uhuru Kenyatta was announcing the nominees.

At the time, she was busy updating the news producer of profiles of individuals that had already been named but didn’t know that she was among them.

They had just arrived when she heard her name mentioned as she was in her room and at first, she wondered who that was. 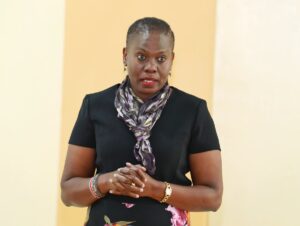 “I still remember clearly, it was on 26th January, we had gone to Mombasa for strategy session and I was busy calling the gallery because I know a lot of the people that were being appointed so I was briefing the producer on their CVs. Then I said let me go to the room and change because we had just arrived then I sit to watch and I asked which Farida is this. I didn’t know until that time,” narrated Karoney.

At the time, Farida Karoney worked as the Chief Operations Officer at the Royal Media Services.

She mentioned that the opportunity came at a time she had talked to the RMS Vice Chairperson about leaving the company, because she had done all that needed to be done at the Communication Centre.

“Even though I had planned on moving to public service because at some point I had told the boss (Vice Chair) that I think I have done all I could have done for Citizen TV and I need to move on. She wasn’t persuaded, but I knew that I had to move somehow. I had done everything, from reporting to editing to leading and there was nothing more for me to do. I wanted to play in a bigger company and the opportunity presented itself through the honor given to me by the President,” said the lands Cabinet Secretary.

Farida Karoney is a Kenyan woman who was nominated by President Uhuru Kenyatta as Cabinet Secretary for Lands, on 26 January 2018.

Prior to her present position, Farida Karoney served as the chief operating officer of the Royal Media Services, a media conglomerate that includes radio and television stations.

Why I lied that my father was dead -Amputee hawker

15 things you should know about Dr. Stella Adadevoh, the woman who curbed the spread…

Mo Abudu celebrates friend who got married at 50 and gave…