Man, 35, allegedly kills his 50-year-old cousin for refusing to marry him

A 35-year-old Ghanaian man has been arrested for allegedly killing his 50-year-old cousin after she refused to marry him.

Graphic GH reported that the sad incident occurred at Uro-Mekaa near Kalba in the Sawla-Tuna Kalba District of the Savannah Region in Ghana.

The suspect, Kpeyiri Neiba, was arrested this week by the Sawla Divisional Police Command for the murder of Janet Ansaaku.

According to the police, during interrogation, the suspect confessed to the gruesome killing, stating that the deceased failed to marry him.

The Savannah Regional Police Public Relations Officer, Adjekum Owusu, who confirmed the incident to DAILY GUIDE, said on Thursday, May 27, one Martin Kojo Soyintey residing at Vongbe near Kalba called at Sawla charge office with a report that Neiba had murdered his cousin called Janet Ansaaku in the bush at Uro-Mekaa.

He said police accompanied by the complainant proceeded to the scene of the crime at Uro-Mekaa and found Janet lying in a pool of blood as a result of the cuts on her body. 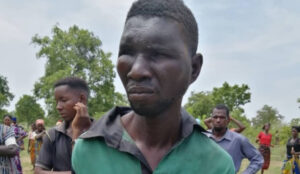 The body was sent to the Sawla District Hospital and a postmortem was subsequently performed on the body before it was released to the bereaved family for burial.

Meanwhile, the suspect is still with the police for further investigation.

Rejection Killings is a term used to describe attacks by men furious with the women who reject their advances and turn down their marriage proposals.

Events like these — where women are killed because they turned men down have become sickeningly familiar in Africa, and all over the world.

It is sad that women can’t even say no to men’s advances in peace without fearing for their lives. A lot of men don’t take rejection well and it is sickening to say the least.

Despite the rise of explicitly misogynist crimes and the increased attention on women’s issues, there’s no comprehensive tracking mechanism for rejection violence and rejection killings. Instead, it’s just story after tragic story.

Learn to honour people so that honour will come to you

Zelensky tells Ukrainians: “We will fight as long as…

A strong woman never stays down no matter how difficult life…

10 problems women in India can relate with