President Joe Biden, as well as former President Bill Clinton and former Secretary of State Hillary Clinton, were among those who paid tribute to Madeleine Albright, the former secretary of state, during her funeral held April 27 at Washington National Cathedral in the nation’s capital.

She regularly attended St. John’s Episcopal Church in Washington’s Georgetown neighborhood and was serving on Washington National Cathedral’s governing body at the time of her death.

“She was loved and admired by all who knew her,” Washington National Cathedral Dean Randy Hollerith said in welcoming the funeral’s invitation-only guests. “We say goodbye today to a remarkable human being. Madeleine was a leader, mentor, trailblazer, reconciler and patriot. She was a person of deep faith who always held firm to the highest ideals of her faith and her country.”

Madeleine Albright joined The Episcopal Church as a young adult when she married Joseph Medill Patterson Albright in 1959. She had been born into a Jewish family in Czechoslovakia in 1937 but said she was never told about her Jewish heritage until a Washington Post reporter uncovered it in 1997. 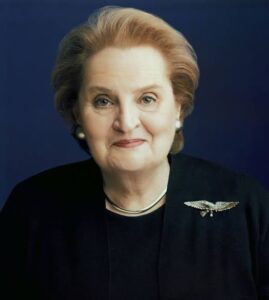 After concluding her time as secretary of state in 2001, Madeleine Albright remained active in the church, including by participating in various cathedral events focused on religion and politics. In November 2021, she gave the eulogy there at the funeral of Colin Powell, one of her successors as secretary of state and a fellow Episcopalian.

Madeleine Jana Korbel Albright was an American diplomat and political scientist who served as the 64th United States secretary of state from 1997 to 2001. A member of the Democratic Party, Albright was the first woman to hold the post.

In addition to English, Russian, and Czech, Albright spoke French, German, Polish, and Serbo-Croatian. She also understood spoken Slovak. Albright mentioned her physical fitness and exercise regimen in several interviews. In 2006, she said she was capable of leg pressing 400 pounds (180 kg).

Dear deadbeat fathers, if you don’t take care of your…

How some women dealt with husbands who were beating them