Jason Momoa has a new woman in his life following his split from Lisa Bonet.

Multiple sources tell PEOPLE the Aquaman star, 42, has been recently dating Eiza González after he and Bonet, 54, announced in January that they were separating after nearly 20 years together.

“They are dating. He cares about her. He’s in a great place, working on Fast X,” an insider says. “He’s quite busy and he’s in a good place.”

Adds a source close to both Momoa and González: “They’re both busy with work but are having fun together. It’s nothing serious yet.”

Momoa was previously photographed attending the premiere of 32-year-old Gonzalez’s movie, Ambulance, last month, although they did not walk the red carpet together. 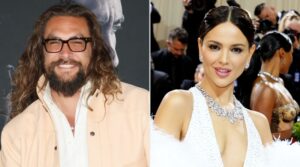 The Dune actor shot down rumors he was dating Kate Beckinsale after he was spotted giving her his jacket at Vanity Fair’s 2022 Academy Awards afterparty. “It was cray. Everyone is like, ‘Are you dating?’ No, no, it was chivalry, the woman was cold,” he told Extra.

“She is very nice, I was being very nice, just being a gentleman,” Momoa continued. “Now, I am not giving my coat to anyone.”

He and Bonet announced in a joint statement that they were “parting ways in marriage” in January. They got married in November 2007 and share daughter Lola Iolani, 14, and son Nakoa-Wolf, 13.

“The love between us carries on, evolving in ways it wishes to be known and lived. We free each other to be who we are learning to become,” they shared in the statement. “Our devotion unwavering to this sacred life … teaching our children what’s possible. Living the Prayer. May Love Prevail J & L.”

Jason Momoa has since showed his continuing support for his stepdaughter Zoë Kravitz at the premiere of her movie The Batman, and he remains friends with her father Lenny Kravitz.

Britney Spears shares she had a miscarriage: ‘A devastating time for any parent’

Why women should let go of dead relationships

10 signs you are trapped in a toxic relationship

British MMA fighter, The Nightmare hacked to death by…