Diana Ross, 78, shined bright as she headlined the Platinum Party at the Palace event on Saturday, June 4.

The event closed out the second to last day of the Platinum Jubilee celebrations that have been an ongoing ball since June 2 in honor of Queen Elizabeth II‘s seventh decade on the throne of England.

The singer closed out the BBC’s Platinum Party at the Palace concert by urging the crowd of spectators to thank the Queen for her service.

Introduced by comedian Lee Mack, the 78-year-old soul singer took to the stage dressed in a white and black tiered voluminous dress with silver jewellery.

During her performance, she began her set with a rendition of “Chain Reaction” while a disco ball projected onto the palace. 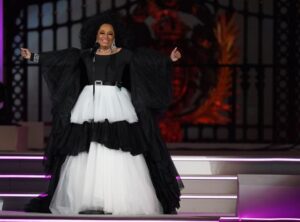 “I am so proud and pleased to be sharing the evening with you!” She exclaimed before exiting the stage.

Ahead of the event, the former Supremes singer gushed about singing for Her Majesty. “I have had the honor of meeting The Queen many times throughout my life, including when I was with my family,” she told the BBC in a statement on May 18.

“Her Majesty has and continues to be such an incredible inspiration to so many across the world, and I was absolutely delighted to receive an invitation to perform on such a momentous and historic occasion.”

Ross last performed in the UK in 2007 during her I Love You tour. She planned to return in 2020, but her tour was postponed due to the coronavirus pandemic.
The Platinum Party at the Palace serves as the kick-off for a string of more than a dozen concerts for the icon across the United Kingdom.
“I look forward to coming to the UK to be with all my fans, friends and family, it is an honor and a privilege to sing and dream, every concert is a blessing and a gift, I am filled with excitement and huge appreciation. Dreams do come true,” Diana noted, per the famous O2 Arena’s website.

The Platinum Jubilee celebrates Queen Elizabeth’s 70th year serving England as its queen. She took the throne in February 1952, although her official coronation took place in June 1953. She is the longest serving monarch England has ever seen.

10 things you shouldn’t do when you fight with your…

Don’t get married because of pressure or love says…